This Is When the Market Goes Haywire 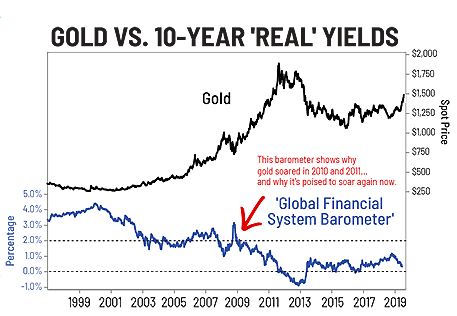 "On August 14, 2019, the Global Financial System Barometer ('GFSB') “ the nominal yield of the U.S. governments benchmark 10-year Treasury bond minus inflation "broke through a critical monetary threshold...And the GFSB, also referred to as the 'real' 10-year yield, plays a significant role...The chart explains what I'm talking about...As you can see, when the GFSB fell below the 2% mark (on the left scale), it heralded the beginnings of a true firestorm....If you look closely, you'll notice that the GFSB collapsed well past its 'resistance' point at 2% in early 2008. It happened just before investment banks began failing and the entire mortgage industry collapsed. What is important is that after dropping through the 2% threshold, the GFSB continued to fall until late 2012. Gold rallied this entire time...And then, suddenly, something changed... What was it? The system began to reflate... It began to work again. But it never made it back to the 1% line, much less the 2% level that ultimately began this crisis. In 2015, gold seemed to bottom at less than $1,100 per ounce. Last month, gold broke out to a six-year high of more than $1,500 per ounce...Meanwhile, the GFSB turned down again....This is wildly bullish for gold. I've predicted that gold would reach $2,500 per ounce....So what should you do today? I would urge you to consider adding a significant amount of gold and gold-related stocks to your portfolio...If we see 'real' yields on the 10-year Treasurys hold below zero, I expect gold will surge to more than $2,500 an ounce very quickly...on its way to $10,000 an ounce."