U.S. Silver Dollars are one of the most popular coins in America. Their large size and beautifully detailed faces make them a prized commodity among collectors and investors alike. One coin in particular, the Morgan Silver Dollar, is admired by many. In fact, the coin has been considered as one of the most beautiful pieces of coinage that the United States Mint has ever released.

What makes the Morgan Dollar so attractive to collectors? Aside from its striking design and the fact that it is composed of 90% silver, many people seek out this coin because of its rich historic value.

Prior to 1792, the United States wasn't allowed to strike its own coinage. Instead, early merchants and colonists used coins from all over Europe, but they were especially fond of the Spanish Silver Dollar from Mexico City. It wasn't until the Mint Act of April 2, 1792, that the Philadelphia Mint was established and that the U.S. Silver Dollar was named the highest denomination silver coin.

In 1859, prospectors in Virginia City, Nevada, discovered the Comstock Lode, the largest silver vein that the world had ever seen. This silver, combined with German silver that had entered circulation in the U.S., flooded the market. As a result, the value of silver began to decrease in 1873. This prompted Congress to pass the Coinage Act of 1873, which ceased all production of silver coinage in the U.S.

Nearly two decades later, the Pittman Act was passed in 1918 as a solution to the huge amounts of unused silver dollars in American banks. The Treasury had to melt down 270 million Morgan Dollars, allowing time for demand of the coins to rise. In 1921, the U.S. Mint used the silver bullion supply from the Pittman Act to create a new series of Morgan Silver Dollars. It was the final year that these beautiful coins were minted, and it represents the majority of coins available for collection today. Later that year, the Peace Silver Dollar took its place. 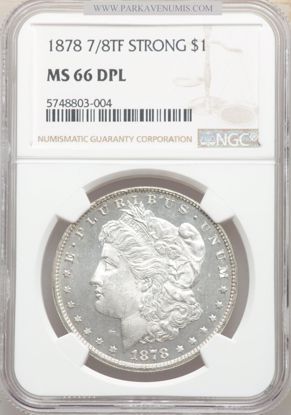 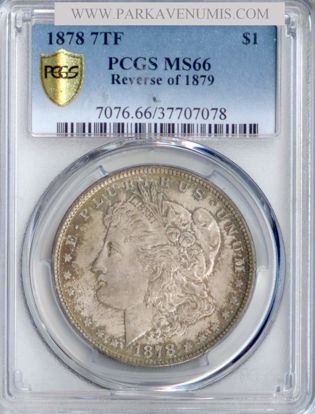 This is a wonderfully original Gem, both sides with iridescent olive, powder blue, antique gold and reddish-apricot highlights to a base of warm dove gray patina. The strike is razor sharp throughout, the luster full, and the surfaces expectably smooth for the assigned grade. The scarcer and more conditionally challenging of the two major hub varieties that comprise the circulation strike 1878 Morgan dollar, the 7 Tailfeathers, Reverse of 1879 is nothing short of rare in the finest Mint State grades. Indeed, this premium quality MS-66 numbers among the finest known to PCGS, and it is seemingly earmarked for inclusion in a high ranked collection on the Set Registry.
$6,750.00 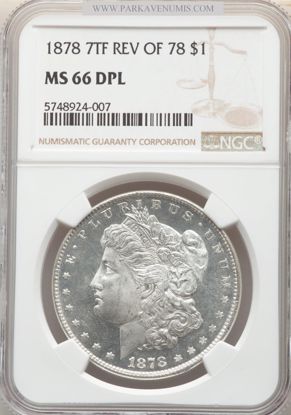 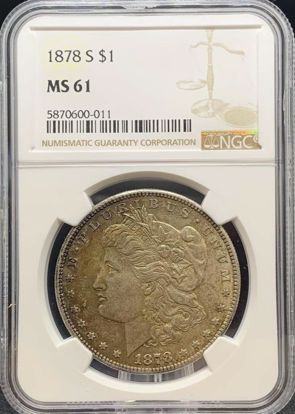 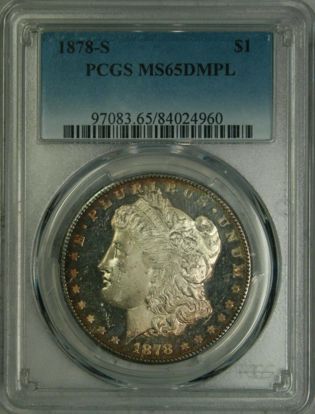 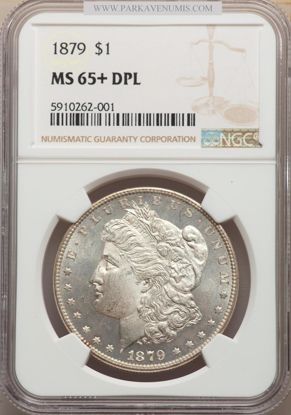 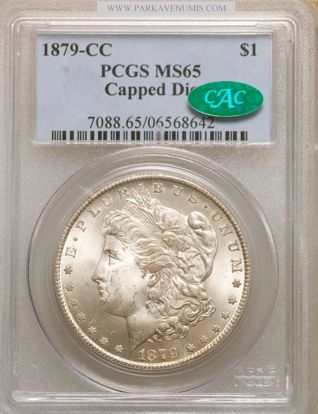 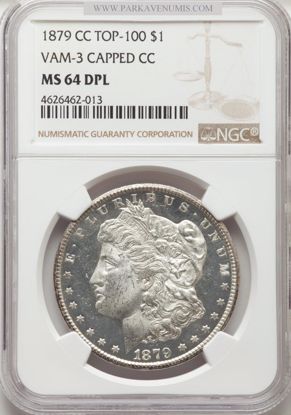 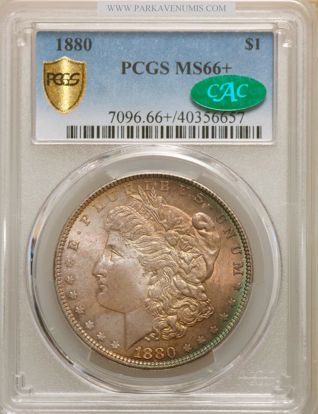 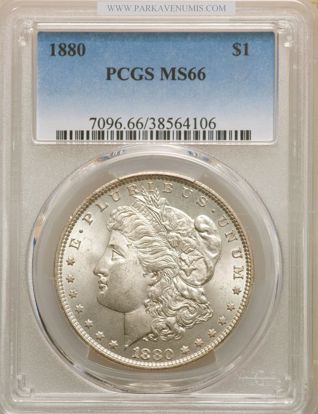 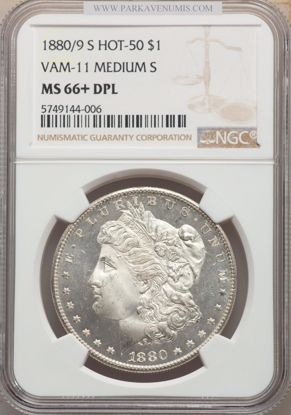 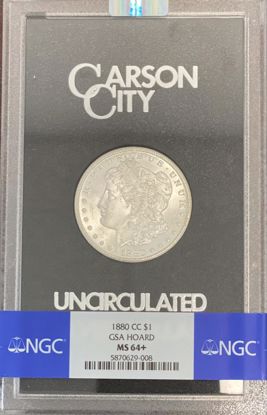 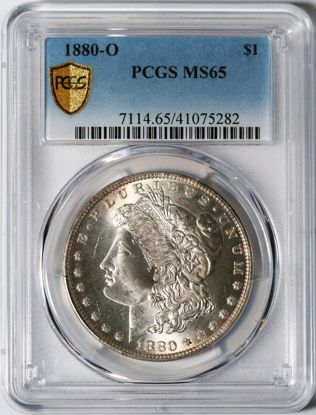 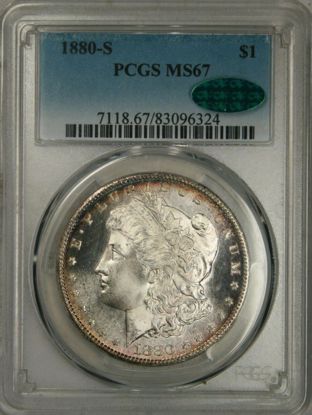 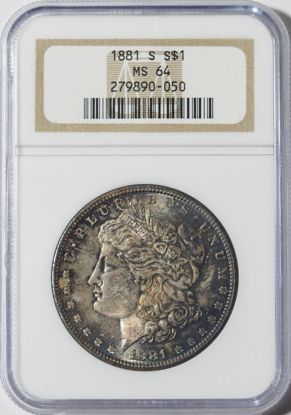 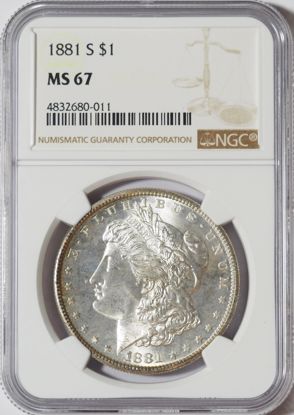 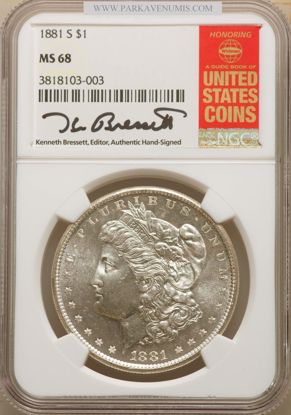 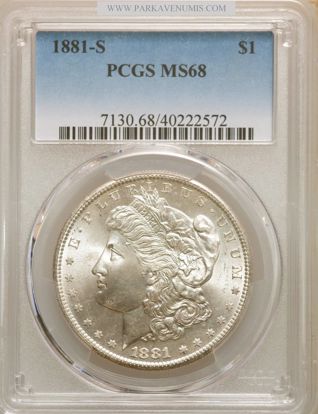 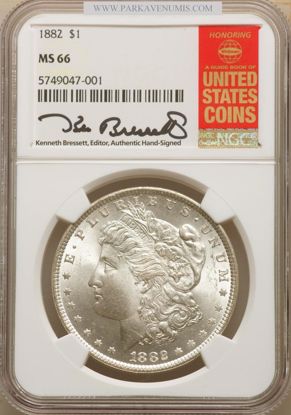 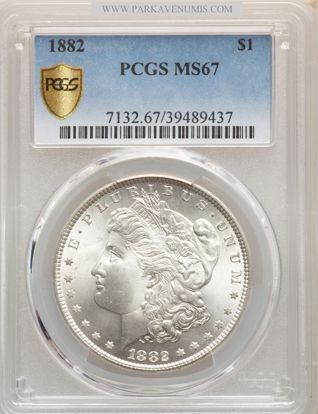