Park Avenue has a unique selection of the iconic Flowing Hair Dollar, issued from 1794 – 1795!

The Flowing Hair Dollar made history as the very first dollar coin issued by the United States federal government! Noticing the popularity of the Spanish Dollar, a popular coin for trade in the Americas in the late 1700’s, the US Federal government designed the Flowing Hair dollar to mimic the its size and weight.

Struck on October 15th, 1794, the first Flowing Hair Silver Dollars came solely from silver ingots, deposited with the Mint, by Mint Director David Rittenhouse, on August 22nd, 2974. The problem was the 1,758 coins that had been struck, were lower quality than expected, because they were struck with a man-powered screw press intended for use on coins no larger than a half dollar.

Then Secretary of State Edmund Randolph, on October 16th, 1794, forwarded the dollar coin to President Washington for his inspection! And although the coin was traded and distributed about to try and gain popularity, Rittenhouse ordered the stoppage of all dollar coin production, until Mint personnel could build a more powerful press that would be capable of striking a cleaner coin.

This new coinage press was completed in early 1795 and the first group of dollars, totaling to 3,810 coins, were delivered on May 6th. In total, 203,033 silver dollars were struck in 1795 however it’s unknown exactly how many were of Flowing Hair Dollars...

Due to the short amount of time that this dollar was struck, it is considered to be one of the rarest and most valuable of all United States coins!

Check out our inventory of this rare silver dollar below and buy today! 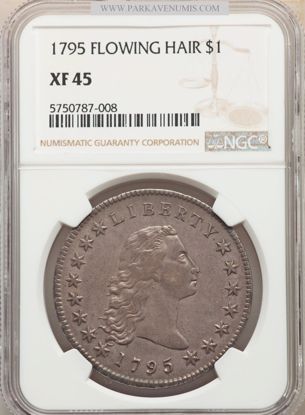 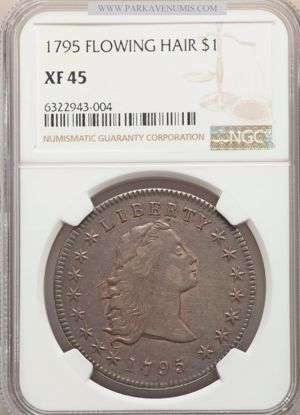