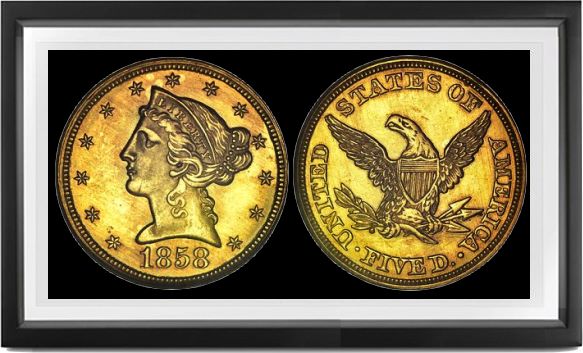 WHEN IT BECAME APARENT that Mint Engraver William Kneass was unlikely to recover from his stroke of 1838, the new Assistant Engraver Christian Gobrecht had to take over his duties (though not his title or full salary), and one of the assignments awaiting him was to revise the designs of the half eagle. In line with Director Patterson's concept of uniformity, the designs of the $10, $5 and $2.50 coins were to be as nearly as possible alike; therefore, the new half eagles were to show an adaptation of the designs adopted for the eagle in the fall of 1839. Those dates 1839 have a head of Ms. Liberty differing in many details (note especially the lower outline of truncation) from those of 1840-65; this date 1839 is also remarkable both for its overdates (two different 1839/38 dies being known) and for having mint marks only on reverse, above VE. The coins of 1840 come in two sizes: the "broad mill" pieces " about 4000 issued in Philadelphia, smaller quantities from each branch mint " have very wide borders and fine edge reeding, the diameter about 15/16" as on coins of 1834-39, the far less rare "narrow mill" coins having narrower border, coarser edge reeding, and diameter about 14/16" through 1907. Reverses continued to have small letters similar to those of 1839 through part of 1842 in Philadelphia, later coins through 1865 having redesigned edge (much larger arrowheads) and larger letter. Large letter reverses are found on some Dahlonega Mint coins in 1842, but on other branch mint issues only beginning in 1843. The major rarity with small letters is the 1841 O, of which only 50 were coined, August 1841, using an 1840 reverse. One of the two specimens known was reported in the October 1938 Numismatist by R.L. Speice; it is not now located. The other turned up before 1909 in possession of William H. Woodin (later Secretary of Treasury), later bring owned by Waldo Newcomer, Col. E.H.R. Green (son of Wall St.'s Hetty Green), King Farouk of Egypt, and Josiah Lilly; it is now in the Smithsonian Institution with the remainder of the Lilly bequest. There are many later rarities without motto; probably the most famous being the 1854 S, of which only 268 were coined " the tiny supply of parting acids available in California (necessary for bringing the silver content of local gold bullion down to legal limits from its normal 12%) had to be reserved mostly for making double eagle. Only three are traced, one of them owned by the same parties as the 1841 O but going from Farouk to Mrs. R Henry Norweb, a second in the Louis Eliasberg collection, the third formerly in the Wolfson collection and now believed to be with the Lilly estate in the Smithsonian. However, by and large, mintages are higher than with other denomination; the main business of the various mints then was making half eagles, half dollars and (in Philadelphia) cents. These coins were made to use, and specimens are normally found in Very Fine condition with plenty of bag marks " few Proofs were made for collectors. One dramatic episode took place in 1861: the Confederacy took over all three Southern branch mints (New Orleans, Charlotte, and Daholnega), firing all employees who declined to swear allegiance to the Stars and Bars, and issuing coins from Union dies (half dollars and twenties at New Orleans, half eagles at the other two mints). The 1861 C and 1861 D half eagles made by the Confederacy cannot be positively distinguished from the Union issue, as the same dies were used for both, through the C mint fives with cracked reverse die (through MER) are believed to be the 887 issued by the CSA. The last few Philadelphia years of this No Motto type are rare low mintages; the only really common date is 1861, made from bullion obtained from remelted small size gold dollars. Later dates mostly went overseas for international payments acceptable only in fold, and were melted there; today they are prizes, the 1865 especially rare. The last coinage without motto was 9000 18866S fives issued in February before the new dies arrived; these have long been cherished even in well worn conditions.