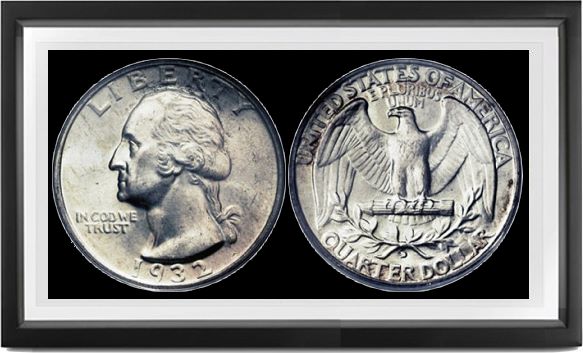 FOLLOWING THE PRECEDENT OF the Lincoln cent (first issued in 1909 to commemorate the centennial of the martyred President's birth), the Treasury proposed in early 1931 that the half dollars to be issued in 1932 should portray George Washington, in honor of the bicentennial of his birth, this portrait to be based on Houdon's (1785) bust at Mt. Vernon. With the Washington Bicentennial Commission and the federal Fine Arts Commission, the Treasury sponsored another competition for designs. Congress changed matters by deciding that not the half dollar but the quarter should be so favored (Act of March 4, 1931), The winner of the competition was Laura Gardin Fraser, distinguished sculptor and coin designer in her own right (Oregon Trail Memorial commemorative halves, among others) and wife of James Earle Fraser, designer of the buffalo nickel. Don Taxay (U.S. Mint and Coinage, p. 364) illustrates the models she submitted, which would have made splendid coins.

Unfortunately, Treasury Secretary Andrew W. Mellon (one of the wealthiest men in the nation, and reputedly one of the stubbornest) refused to agree to the two commissions' adjudication of the competition. A second competition (judged October 27, 1931) again awarded the prize to Mrs. Fraser, and again Mellon refused to consent, It has turned out that he knew who had submitted the prize winning models, and the suggestion has been voiced that it was indurated male chauvinism which motivated him—unwillingness to let any woman win out. Mellon chose the John Flannagan design, which he had favored all along.

Early in 1932, Odgen L. Mills succeeded Mellon, and the Commission of Fine Arts wrote to the new Secretary urging that he approve the prize-winning entry for production coins. Mills merely agreed to his predecessor's judgment, and named Flannagan as the designer of the new quarter dollar.

How valid were the Commissions' objections to the Flannagan design can be judged by the fact that on even Mint State specimens of 1932 and 1934 from all mints, the obverse motto IN GOD WE TRUST is always faint and often completely illegible; after a little wear, it is entirely SO.

As a result, during 1934 not one but two changes were made, producing "medium" and "heavy" motto types; both are to be found on both Philadelphia and Denver Mint quarters of that year, replacing the (1932-34) light motto. Coins of 1935 all have the medium motto, those of 1936 and later years the heavy type. The heavy motto is identified most quickly by the middle stroke of W, which is taller than the outer strokes. At least six more modifications of the design have been made since, none wholly satisfactory; in 1938, for instance, the profile was sharpened up, and again in 1944, with changes in the shape of the peruque and its ribbon. The 1944 version showed somewhat misshapen designer's initials JF, a fault corrected the next year.

There are no genuinely rare Washington quarters, though the 1932 D and 1936 D are very scarce in full Mint State, very few rolls having been saved in those years compared to others. Large and small mint marks are known for 1941 S; those alleged for 1934 D and 1936 D on microscopic examination proved to have not enlarged D's but heavily repunched ones.

In response to a silver shortage, the Mint began issuing lightweight slick "sandwich metal" coins of inferior design definition, in immense quantities, the first date being 1965. Beginning in 1968, mint marks begin to appear to right of the ribbon, the S Mint coins being issued only in Proof State in the sets. These Proofs generally show no more design definition than the silver production coins, and often less. None of them can be called even scarce.

Click here to view our current inventory of Washington Quarters