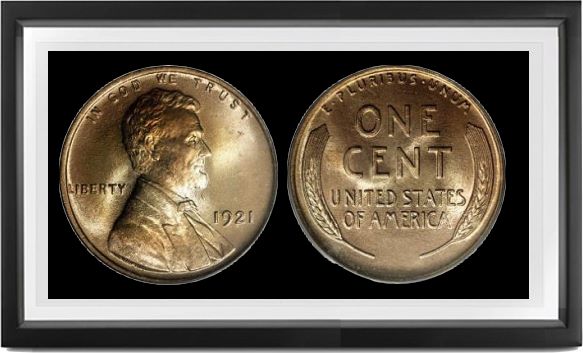 WE OWE THE LINCOLN DESIGN to a grand coincidence: Victor D. Brenner's obsession with Lincoln, his having lately modeled a medal and a plaque of the martyred President, his prolonged close contract with Theodore Roosevelt during the latter's sittings for his portrait on the Panama Canal Service medal, the upcoming 50th anniversary of the "Indian" cent, and the centennial of Lincoln's birth. Roosevelt, with his head still full of his "pet crime" " improving our other coins as he had just done for the gold, approved of the idea of a new cent design and invited Brenner to submit his ideas.

Brenner's original reverse design was copied from the then current: French 2-franc piece; when Mint Director Leach found out, he rejected it. On February 17, 1909, Brenner brought to Washington a new reverse design " two heads of durum semolina wheat enclosing the necessary lettering. He had signed his full name on the obverse but when Director Leach had him remove it, he substituted VDB at bottom reverse. When the new cents appeared with these initials, newspaper attacks followed and people hoarded the coins correctly expecting that later cents would drop the initials. The alternate proposal to substitute a modest B on truncation was objected to by Mint Engraver C.E. Barber (who had been using it on the 1892-1916 silver coins) and Brenner's initials did not find their way there until January 1918, a few months after Barber's death; they remain there today.

The only real rarities in this period are some of the Matte Proofs, (ultra-sharp medallic impressions specially finished for collectors, notably 1909 VDB, 1915-16). A rarity of another kind is the 1922 "plain." When the Denver Mint had to complete its quota of 7,160,000 cents with no additional cent dies furnished, because the rest of the year had to be devoted solely to coining Peace dollars, the last few thousands of 1922 D cents were made from an obverse die (weakened from removing clash marks) which wore down so that the mintmark became weak, then illegible and finally invisible. Many worn examples survive, but very few in Mint State; forgeries have been made by scraping off the D.

Owing to copper's becoming a strategic metal during World War II, efforts to find a substitute material for cents resulted in the expedient of low-carbon steel coated with zinc, which quickly corroded; cents of this stuff were coined in 1943, and in 1944 some mere accidentally coined on leftover steel banks, even as some 1943 cents had been coined on leftover 1942 bronze blanks. Fewer than a dozen of either have been authenticated, though ten-thousands of forgeries exist of the 1943 bronze.

In 1955, one mismade obverse die (the famous "Double Shift") managed to slip past inspectors long enough to make a few ten-thousands of impressions, even as a similar though less obvious one had done in 1936. The report of specimens dated 1959 bearing the old wheat heads reverse has not as yet been confirmed by examination of any genuine examples.

The current Lincoln cent reverse was the first design by Frank Gasparro, then Assistant Engraver of the Mint, to be placed on a United States coin. This design was an over-simplified copy of the Lincoln Memorial Building as depicted on the $5 bill, minus the shading or the foliage. It was intended to commemorate the 150th anniversary of Lincoln's birth, but we are left to guess this solely by knowing the original date of issue.

In 1960 a change in the matrices resulted in small and large date varieties together with one not pictured in the Guidebook, namely the large date over small date, which occurs on both Proofs and business strikes. All "double date" impressions dated 1969 are counterfeits made by Mort Goodman; all were thought to have been recovered by the Secret Service during preparation of the Justice Department's successful prosecution, but it is possible that a few remain in private hands. Another modification in the matrices resulted in "small" and "large" date coins for 1970 S; in the "large," the tail of 7 extends below base line of 0, and its top is noticeably below those of 9-0; Proofs have become scarce. Since then, the only really notable discovery to date is the famous 1972 "double die," produced by the same accident in diemaking as the more noticeable 1955; publicity for this even reached the pages of TIME.