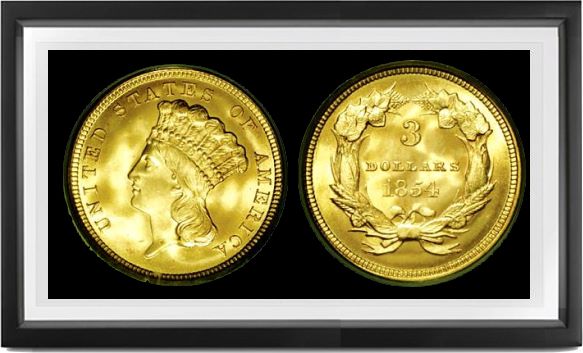 THE FIRST PROPOSAL FOR A $3 COIN dates back to June 1832 when Rep. Campbell P. White, chairman of a Select Committee, presented a report (H.R. Report 496, 22nd Congress, 1st Session) condemning bimetallism and introducing a bill, H. R. 603, which would have authorized a $3 piece to weigh 75 grains, along with proportionately tariffed $5 and $2,50 coins. The bill was never voted on, though a modified version (minus the $3) became the Mint Act of June 18, 1834.

When the Act of March 3, 1845 authorized issue of postage stamps, it established the letter rate as 5 cents. The very same act of March 3, 1851 which authorized Senator D. S. Dickinson’s base silver 3 cents reduced the letter rate to 3 cents. Congressmen appeared to believe – following the faulty reasoning of Mint Director Robert Maskell Patterson – that the main purpose of the 3 cent piece would be to buy postage stamps without using unpopular, heavy and often filthy large cents. Accordingly, the Mint Act of February 21 1853, best known for authorizing lightweight silver coinage with arrows at dates, also included a fine-print clause authorizing issue of a $3 gold coin, to weigh 77.4 grains, 900 Fine, for uniformity with $1 through $20. Congressmen believed that this coin would be convenient for exchange for rolls or small bags of silver 3 cent pieces, and for buying sheets of 3 cent stamps – always bypassing use of copper cents.

Longacre submitted two designs to Mint Director Pettit; one was accepted and he began at once to make the relief models for translation into hubs and working dies. The “Indian Princess” head does not depict any Indian, of course, but is yet another avatar of the Greco-Roman “Venus Accroupie” profile which had already served for the gold dollar and double eagle, though now with another headdress supposed to emphasize “national character.” Taxay, in U.S. Mint and Coinage, 213, reproduces several Longacre drawings which illustrate this fact.

Fifteen Proofs were submitted for approval, April 28, 1854; regular coinage began on May 1, the first delivery being 23, 140 pieces on May 8. Many were saved as souvenirs by curiosity seekers, and the 1854 – with the largest mintage of all – is one of the few dates always available for a price (the others being 1855 , 1874, and 1878). Many others circulated only briefly and ended their travels as watch fobs, cuff links or other jewelry. Only the one date 1854 comes with small letters in DOLLARS; other 1855-89 have large letters, making two types in all for this denomination.

Limited mintages were the rule from then on until the denomination was discounted in 1889 (being abolished by the Act of September 26, 1890); in many of these years the majority of survivors originated as Proofs for collectors. The result was a large number of coveted rarities and heavy collector demand for Proofs of some years, followed by several limited issues of restrikes of 1865, 1873, 1875 and reportedly other dates.

The rarest one of all, however, has not been restruck. On May 14, 1870, O.H. LaGrange, superintendent at the San Francisco Mint, wired Mint Director Pollack to the effect that he had just discovered that the gold dollar and $3 dies lacked the mintmark S. Pollack ordered the dies to be returned to Philadelphia, to be replaced by proper ones. On May 27, LaGrange wrote Pollock that before the S-less dies were returned, Coiner J.B. Harmstead had punched an S into the $3 die to strike one piece for the cornerstone of the new Mint Building (5th St. near Mission, now the Mint Museum). Harmstead, it seems, also made one for his own use, and it is now in the Eliasberg collection; LaGrange never alluded to the manufacture of this one; but it has become one of the most famous U.S. gold coins ever made.

The usual story goes that the $3 gold was coined only so long as the letter rate remained 3 cents, being discontinued when it was changed again. Be that as it may, threes saw little postal use in the West and South, as they were minted in Dahlonega and New Orleans only in 1854, and in San Francisco for circulation only 1855-57 and 1860. Threes thus represent relics of an interesting but abortive experiment, among the most passionately coveted of American gold coins.