THE SHIELD NICKELS WITH RAYS 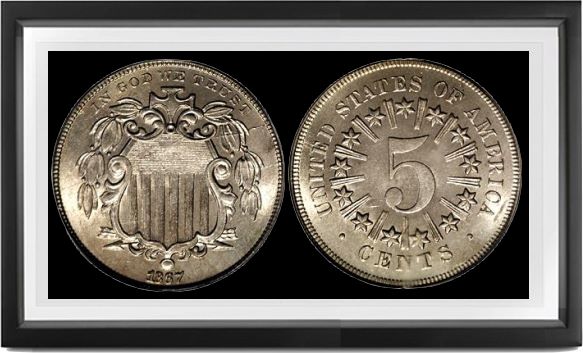 WHEN SILVER COINS BEGAN disappearing from circulation during the Civil War, the four denominations most affected—half dimes, dimes, quarters and half dollars—were replaced at first by General Spinner's invention of Postage Currency, then by Fractional Currency, which was irredeemable but exchangeable in quantity by banks or merchants for Legal Tender notes, which latter could be turned in for interest-bearing Treasury bonds. Nevertheless, the fractional notes—the 5 cent more than the higher denominations, as these circulated more than the latter—quickly became an intolerable nuisance, filthy rags and tatters, derisively called "shin plasters." After the war ended, clearly something had to be done about shin plasters. Not enough silver was available to buy them back at face value. As the Act of March 3, 1865 had provided a precedent in authorizing coinage of nickel 3 cent pieces to retire the 3 cent fractional notes, so something similar appeared feasible for retiring the far larger number of 5 cent notes. Proportionately, if a 3 cent piece weighed 30 grains, then a nickel 5 cent piece should weigh 50 grains. Mint Director James Pollock, long opposed to nickel coinage, prepared a bill authorizing such coins though at 60 grains apiece—an obvious sop to congressional friends of Joseph Wharton, the nickel monopolist. The House coinage committee under Rep. John A. Kasson changed this to 77.16 grains, ostensibly to express the weight in metric units (= 5 grams), but in reality to increase the size of Mint orders for nickel bullion from Wharton. The bill was reported out of committee and passed both houses without debate the same day, becoming the Act of May 16, 1866. Nickels were legal tender up to $1, and were to be paid out for 5 cents fractional or postal notes, which must be cancelled immediately, in parallel with the 3 cent act.

Not that the measure was successful in ridding the country of 5 cent notes. Over 44.8-million Postage Currency notes had been issued, almost 56-million Second Issue (bronze ovals), over 13-million Third Issue—in all almost 114-million, more than the entire mintage of half dimes since 1794. (By 1884 only 76.7-million 5 cent notes had been turned in, leaving 37.2-million still in public hands, mostly in wretched condition.) During late 1865 and early 1866, while the bill was still being talked about in congress, Longacre prepared a variety of pattern dies for the new nickel 5 cent piece. Mint Director Pollock rejected the Lincoln head device outright, alleging intense Southern opposition, and expressed a weak preference for a design with a shield copied from the 2 cent piece—possibly because it was in lowest relief and might cause least wear and tear on dies. (Even so, nickel blanks caused more die breakage than all other denominations put together; shield nickels are commoner with die cracks than without them, except in Proof State.) The first shield patterns dated 1865 have the identical stars-and-rays die used on the 125+ 1866 Proofs, showing a plain center dot. However, nobody knows if they were made in 1865 or 1866 or later. They are highly prized.

The first Proofs of the adopted design made in 1866 were issued with the sets, probably a few more individually and with minor sets. All have center dot on both sides, even the dull ones with rounded borders which have been unjustly doubted.

Business strikes of 1866 come with a variety of recut dates, some grotesque corrections of misplaced dates, one rarity of this kind reading 18666.

After about a million business strikes had been made dated 1867, Treasury Secretary McCulloch on January 21, 1867 ordered that the rays be henceforth omitted. We may conjecture his reasons: poor striking on the 1866 coins, or rumors that the often blurry rays among stars were intended for the Confederate "stars and bars" device. This order had the effect of creating a fabulous rarity: The Proof 1867 with rays, only 25 being issued with the sets of February 7. About 12 to 15 now survive, all from a single pair of dies—outer leaf below U hollow, 2nd to 6th white stripes showing roughness at bottom. These were the last coins made with rays.