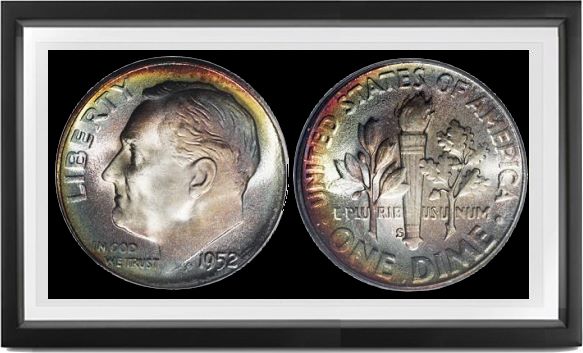 THE SUDDEN DEATH OF President Franklin D. Roosevelt in 1945 immediately induced unknown officials in the Treasury Department to propose that his portrait be immediately placed on a coin of regular issue, as had been vainly proposed for Lincoln. The only denominations available without special legislation were the Lincoln cent, the Weinman or “Mercury” dime, and the half dollar. For unknown reasons, the dime was chosen, and Mint Engraver John R. Sinnock accordingly made models featuring a large head in low relief, which he submitted to the federal Fine Arts Commission via Acting Director Leland Howard, October 12, 1945. The Commission disliked it, but after a conference in which their ideas were expressed in detail, Sinnock submitted new models with only minute modifications—principally, more detail was visible on jaw and cheekbones, IN GOD WE TRUST was moved from below neck to before it and reduced in size, the date taking its place, LIBERTY placed before face rather than above head. The coins were rushed into production to coincide with the 1946 “March of Dimes” campaign.

As with the Weinman design, the working dies each year were completely hubbed, so that there are no major varieties after 1946. Coins of that date come in two varieties. The first, from a hub abandoned in that year, shows Y much farther from forelock than on any later years; the engraver’s initials JS are small, weak and often misshapen. Most of these Type One coins are Philadelphia Mint products, and originally no branch Mint Type One’s were believed to exist, but both D and S Mint examples are now known, though rare. Later 1946 issues and all subsequent dates show Y near forelock and a larger, plainer, better shaped JS.

This JS proved to be a source of controversy from the beginning of issue: red-baiters spread stupid, ridiculous and malicious rumors to the effect that the initials JS stood for Joseph Stalin. The rumors got as far as Congress, at which point the Treasury Department insisted that they be squelched. The Mint Bureau accordingly issued an official denial. Initials JS had never meant anyone but John R. Sinnock, of course, and the rumors’ sole basis was the purely paranoid one that some reactionary superpatriots believed the late President to have been a Communist!

There are no rare Roosevelt silver dimes. All dates and mint marks were coined in enormous quantities, and all were saved for future collectors and investors in roll and bag lots; perhaps fewer of 1949 S than of the rest.

Claims have been made of pointed and blunt 9’s and 6’s for 1960 and some later years. Evidence of intentional variation is lacking; at least some of the pointed digits could have originated in relapping or buffing dies, either for Proofs or to efface clash marks.

Beginning in 1965, the Mint abandoned anticounterfeiting methods thousands of years old. At a juncture when silver was beginning to be in short supply, and when the vending machine industry insisted that a different metal would not pass counterfeit detectors without prohibitively time consuming and costly retooling taking possibly five years to complete, the Mint acceded to recommendations of the Battelle Institute and adopted “sandwich metal” coins consisting of thin cupro-nickel layers bonded to copper cores. The new-standard dimes are lightweight (2.27 rather than 2.50 grams), slick to the touch (like cast counterfeits of former decades), and show less design detail on devices (like most counterfeits) than did the silver coins, leaving the forger’s task easier than ever before.

Beginning in 1968, mint marks were crowded in above the dates, rather than left of the torch as 1946-64. Since then, S Mint dimes have been made only in Proof State for the sets. Nevertheless, some Proof sets of 1968 and 1970 (and possibly other years) have been found with dimes lacking any mint mark at all: major mint errors, and genuinely rare ones.

Click here to view our current inventory of Roosevelt Dimes