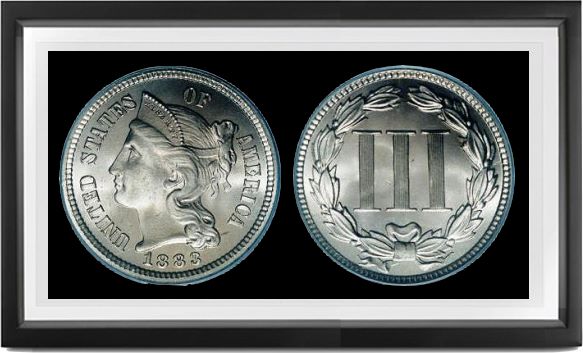 IN MARCH 1864, the Mint was running out of nickel for cents, the requirements being so enormous that Joseph Wharton's mines—even the newly opened ones in Canada—could not supply the want. Mint Director James Pollock, until then a bitter opponent of the use of nickel in coinage (it was extremely hard to work by their current metallurgical techniques, it was expensive, and it was destructive to dies), seized this opportunity to urge passage of a bill to authorize coinage of cents, 2 cent and 3 cent pieces in bronze. The bill became law over powerful opposition from Wharton's friends in Congress—minus the reference to 3 cent pieces.

Why this denomination? Not, as one might suppose, to replace the now vanished silver trimes (three cent silver coins), but because some circulation medium was felt appropriate to retire the unpopular 3 cent fractional notes, which had been authorized by the Act of March 3, 1863. The 3 cent notes, like the trimes, found their major use in postal transactions: one would send a letter on its way, a hundred (or a $3 gold piece) would buy a sheet. They were the smallest in size as well as of value of any fractional notes, quickly became foul things of rags and tatters, and were easily lost—becoming known, even more than higher denominations by the derisive term "shin plasters." Privately made cent-size tokens (copper, bronze or brass) began circulating in quantities, and continued to do so despite a penalty clause in the 1864 act which forbade their manufacture or issue, the tokens being accepted in preference to the fractional notes.

This was the opportunity Wharton's supporters had been awaiting. Until March 1865 they put unceasing pressure on Rep. John A. Kasson (their chief opponent), who finally agreed that anything, even Wharton's latest proposal of coins of 25% nickel, 75% copper, would be better than any more proliferation of shin plasters. They presented him with a proposed bill authorizing coinage of nickel 3 cent pieces at 30 grains each, to be legal tender to 60 cents (while 1 cent and 2 cent would thereafter be legal tender only to 4 cent: petty spite), and to be paid out in exchange for 3 cent notes which would thereafter be cancelled; implication—the coins would replace a like number of shin plasters. Kasson introduced the bill; it passed both houses without debate and became law the same day, March 3, 1865.

Longacre resurrected a Liberty head with ribbon and coronet which he had first used on pattern cents and quarter eagles (1857); reverse used the III as in experimental billon 3 cent of 1849, within the wreath earlier used on 1859 cents. No changes occurred during the coin's tenure, 1864-89.

The vast majority of the coinage, 1865-76 was actually used in retiring over 17 million 3 cent notes, the rest mostly for stamps; this use is reflected in diminishing quantities coined 1865-76.

Many Proofs, 1865-83, and some of later years, are dull and sometimes show planchet defects.

In the years 1879-80, 1882-87, most survivors are Proofs, and true business strikes (frosty Uric.) are rarely seen. Many of 1888-9 were melted when the design was abolished, following a change in postal rates. Millions more of earlier dates were turned in and re-coined into Liberty head nickels. The series has been somewhat neglected in recent years, partly because of stereotypy (little attention being paid even to the rarer varieties).