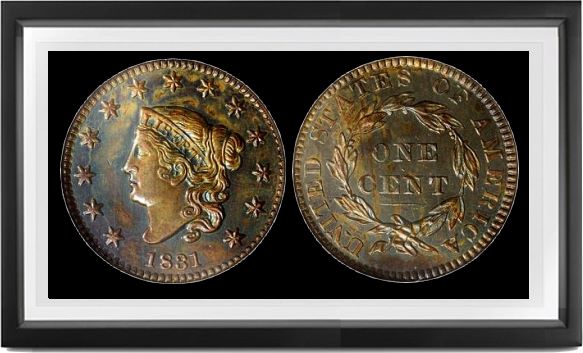 WHEN CENT COINAGE RESUMED IN 1816 (after its 1815 interruption when the Mint was out of copper planchets), the new issues bore a spectacularly ugly head of Liberty by Robert Scot, the Christmas wreath reverse being continued since 1808 without appreciable change. Back around 1950, Dr. Sheldon said that this head "resembled an obese ward boss instead of a lady," from which remark I unofficially christened these coins "Tammany Cents," after the name for the notorious generations of obese political ward bosses in New York City. As "Tammany" was originally an Indian chief, the use of this name has been criticized in many quarters, and some of the Early American Coppers people have been calling this caricature of Ms. Liberty "Matron Head," which may have to do until a more descriptive name is found.

There are minor modifications, one beginning in 1820, others in the mid 1830's, but the basic concept remained the same until Christian Gobrecht contributed two entirety new ones in 1839. The dies were reasonably tough, averaging over 100,000 impressions apiece; in Fine condition all dates are obtainable (the 1823 a little more expensively than the rest), though in Uncirculated state they have been widely dispersed. Really choice examples of some issues 1821, 1823; 1824 due to hoarding by one specialist; small letter coins of 1829-30) are harder to find.

The most spectacular variety in the series is probably the Fifteen Stars coin of 1817. In worn condition it is common, though possibly only a dozen exist in full Mint State, and perhaps a dozen more in AU. It was obviously an error of spacing the stars, the first half dozen being punched too close together, the rest added in nearly equal spacing, making 15 in all; better to issue it this way than to discard a usable die, such was the shortage of good steel then.

The date 1823 is omitted in mint reports, apparently the cent coinage bearing this date being struck in 1824. Elsewhere I have estimated its amount as 68,061 out of the quantity reported for 1824. The date was long thought scarce enough in upper grades to stimulate Joseph J. Mickley and friends to make restrikes, using the broken original obverse die (recovered among various old broken dies sold by the Mint in 1831-33 as scrap metal) and an 1813 reverse; the die is still extant though defaced.

Beginning in 1831 Kneass began in a small way sharpening up the cent designs, in 1835 introducing a complete reverse hub (Type of 1836), but each working die (as in 1798-1802) still required much hand finishing. Only in 1839 was this problem to be solved, and Scot's caricature head abandoned.

Christian Gobrecht (1785-1844) took over the Engravership from the ailing William Kneass late in 1835, after the latter had suffered a stroke. Among his various tasks was improvement of cent designs " not that he was much more of a designer than Scot had been; his forte was translating other artists' designs into metal. And so we find on the cents of 1839 (a year dear to early American copper collectors) several different heads, two representing new conceptions.

(1) 1839 over 1836. This is a recurrence of the Head of 1835-6 with plain hair cords; the solitary die cracked across, leaving Uncirculated examples prohibitively rare and even worn ones highly prized.

(3) "Silly" Head. A modification of the last, the hair more piled up on top, the profile modified—not to its improvement, same reverse as the 1839/36.

(4) "Booby" Head. This is readily identifiable by Ms. Liberty's sharp-angled truncation line: (neck/shoulder) visible at lower right as a triangular area, behind and below which are parts of one and the same lock of hair—anatomically and sculpturally impossible. More than half the mintage of this year bore this curious design.