THE LIBERTY HEAD NICKELS WITHOUT CENTS 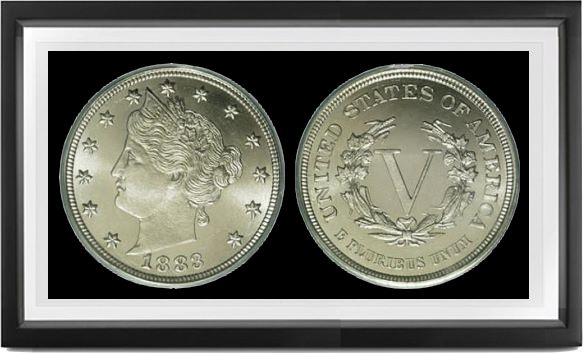 BEGINNING IN 1881, MINT DIRECTOR Snowden—following still another of Joseph Wharton's recurring proposals for a uniform nickel coinage of 1 cent-3 cent-5 cent " ordered Charles E. Barber to prepare appropriate pattern dies to illustrate the proposal for a congressional committee. Obverse showed a profile of Liberty, copied from a Greco-Roman marble head though with several wheat heads, cotton heads and cotton bolls inserted behind and above the coronet. Reverse consisted of value in Roman numerals within a rococo wreath of wheat, corn and cotton. No action was taken on the proposal in 1881; accordingly, Barber made dies for a variety of similar pattern 5 cent pieces in 1882. These were broader than the then current shield nickels—diameter 21 to 22 mm compared to 20 on the circulating coinage; this was also in line with one of Wharton's recommendations (1877), to enable the coins to ring properly (which shield nickels generally do not) and make more difficult the task of counterfeiters.

No action was taken on the proposal in 1882; accordingly, Barber, under official orders, continued to make pattern dies well into 1883. The then Secretary of Treasury approved the version with stars (instead of lettering) around head, and motto below wreath—but no CENTS. Specimens of this design dated 1882 are known (Judd No. 1690), most of them oddly in circulated condition (pocket pieces? used for barroom betting?); and ever since 1957 when Bernie Marshfield won a prize at the St. Louis Convention for exhibiting one of them in solitary splendor, the 1882 "no CENTS" has been in extreme demand—parallel to the other "year minus one" coins (1856 Flying Eagle cent, 1858 Indian type of '59, 1859 Indian type of '60, 1863 bronze cent, 1865 shield nickel with rays, 1866 shield nickel without rays, larger silver coins of 1865 with motto as adopted in 1866, gold coins of 1865 with motto as adopted in 1866, etc.).

Accordingly, regular hubs were made up and some five-and-a-half-million specimens struck for circulation, plus 5,219 Proofs. At which point the whole powder-train went up, as Herman Melville put it. People noticed that there was no mention of CENTS, and began saving these "mistake" coins (for which reason they are common today in Uncirculated and AU condition) on the assumption that they would be withdrawn; but worse still was to follow.

Unscrupulous persons obtained many examples of the new design, reeded the edges, gold plated the coins, and palmed them off on the unwary as new $5 gold pieces. At least one famous court case involved a deaf-mute who did the actual "shoving" so that his victims could never truthfully testify that he had said that these were half eagles. Thousands of the original "Racketeer" nickels, with partially rubbed-off gold plating or gold washing, survive today, many with reeded edges, others with plain edges. Others—aiming at the coin collecting market rather than the gullible general public—have in recent years gilt ordinary centless nickels and sold them as "Racketeer Nickels," thereby exposing themselves to this epithet.

Protests multiplied. Mint Director Snowden ordered Barber to modify the reverse so as to embody the word CENTS. His first and better idea was to have CENTS on a scroll across V; this was rejected in favor of the more crowded arrangement with CENTS below and the Latin motto in smaller letters above. This second version was approved and the new dies promptly went into production. However, the centless nickels were not withdrawn, and only the proliferation of nickels with CENTS finally put an end to the gilding racket.