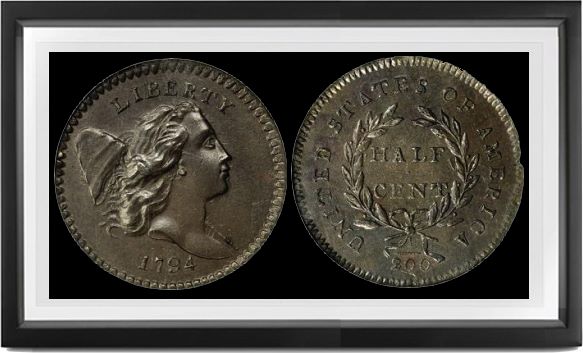 THESE WERE THE MINT'S DARKEST HOURS: adverse criticisms poured in from all sides, congressional opponents—some of whom expected to make a sizable amount should the institution be abolished and the coinage contracts awarded to their friends in Birmingham, Eng-land—had mounted a massive investigation explicitly aimed at finding cause to repeal "Statute One," the Act of April 2, 1792 which was the Mint's legal authority for existence to the present day. Few coins were made at all, and only a small part of these ever reached the hands of the average citizen. Even in Philadelphia, your wages would most likely have consisted of—if you were lucky—a number of worn and/or cut-up Spanish and Mexican silver coins, together with worn-out British and Irish coppers which had better be spent without close examination in the hope that the storekeeper would do likewise. If you were not so lucky, your wages would have consisted mostly of a horrid little pile of irredeemable scrip issued by this turnpike company, that general store, or Jedediah Jukes's Bank in Lower Scarecrowsville.

To top it all off, the annual yellow fever epidemics since 1793 had killed off half a dozen of the Mint's most valuable personnel, including Engraver Joseph Wright. Bullion and tool steel were all but impossible to come by; gears for the Mint's rolling mills—copper because iron ones could not be had—kept wearing out. Steel available for dies was of poor quality, tending to buckle, chip or split after brief use.

No wonder, then, that the half cents of 1794-97 show evidence of being emergency issues. Those of 1794 bore several different versions of Robert Scot's crude copy of Joseph Wright's 1793 Liberty Cap design: one with head much too high in field, three fairly normal, one with the die so deeply incised (the High Relief Head) that even newly struck coins lacked central details as though worn; 81,600 in all were made this year. Those of 1795 bore John Smith Gardner's simplified copy of the Scot copy design, and only 25,600 were struck before President Washington's order reducing the weight from 104 to 84 grains apiece became effective. In the meantime, the Mint's perpetual search for good copper led the authorities to buy 1,076 lbs. (estimated to be about 32,000 pieces in all) of Talbot, Allum & Lee tokens, which were cut down for use as half cent planchets. Many of the 1795 plain edge, no pole coins show plain evidence of overstriking on these tokens (first quarter of 1796). Fewer of this date, with one or two survivors dated 1796, are on thick planchets—far above the legal limit, reportedly as high as 123 grains—and occasionally show undertypes indicating that they were struck on what Voigt & Eckfeldt called "spoiled" cents, mostly cents struck far off center. Uncirculated specimens of most varieties, 1794-97, are much rarer than those of 1793; in all grades, about 1% of the total issue still survives, possibly as much as 1.3% for 1794, not over 0.8% of the 6,480 coined dated 1796 (die failure rendered these quickly illegible as it had done for 1793 Liberty Cap cents).

The coins of 1797 include some 12,167 struck in 1799 and it is now possible to identify at least some of the latter. Of the three obverse dies, the 1 above 1 (a die blunder) shattered, the Centered Head rusted, and the Low Head (which comes with edge lettered, "gripped" or plain) cracked across from chin to rim, but it is the last-named, in cracked state, which provides most of the interest. The lettered edge coins are as rare as the 1796, and much harder to find in Fine or better condition; nevertheless, they come on thick and thin flans, as do the gripped and plain edges, and examples of all three subvarieties are known overstruck on cut-down cents. To date two have been identified as overstrikes on very late varieties of 1798, which cents are almost certain to have been among those struck in 1799 from 1798 dies; it follows that the 1797 Low Heads in this and later die states, overstrikes or not, must have been among those made in 1799! Many of the other 1797′,s were struck on a later consignment of cut-down Talbot, Allum & Lee tokens; others on copper from a variety of sources. Uncs. are rarer than those of 1796! The above findings give only a hint of the great variety and interest provided by these emergency issues of the days when from one day to next it was doubtful if the Mint would go on existing.