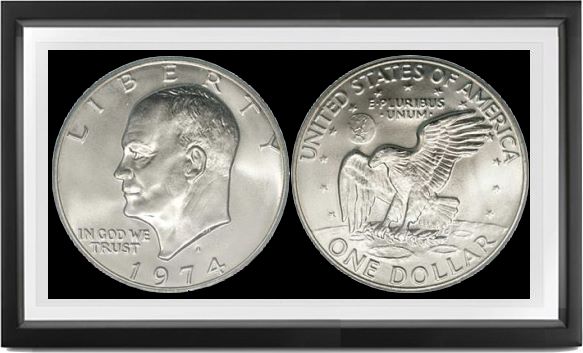 When the Mint Bureau decided to honor Neil Armstrong and "Buzz" Aldrin for planting mankind's first footsteps on the Moon, the problem of choosing a denomination arose. The smaller ones seemed too unimpressive, and the regular half dollar would have required an Act of Congress. As several successive Mint Directors, fearing coin collectors, had officially declared commemorative half dollars a no-no, officialdom decided to revive the dollar coin, though in nickel-clad sandwich metal at a 22.68 gram weight (=350 grains), reserving silver-clad for special purposes.

And so Mint Engraver Frank Gasparro chose to represent the historic message "The Eagle Has Landed," with the Eagle about to drop his olive branch into the Plain of Tranquility (fortunately no arrows were brought along). Spaceship Earth is visible near the restored New Constellation of 1783 (13 stars in a circular arc). Alas, Gasparro's Earth shows neither the beautiful swirling clouds actually seen from the Moon, nor an accurate outline of the continents, but contours vaguely like parts of the USA, Mexico, Central America and northern South America, with a grossly exaggerated West Indies.

Because President Dwight D. "Ike" Eisenhower had died four months before the Moon landing, his portrait was chosen for obverse; Gasparro used the same layout as on the current quarter dollar. Both designs had to be modified several times; reportedly to improve striking quality.

The coins early received the sobriquet of "Ike" dollars, though a few careless promoters called them "silver" dollars and got into trouble with the federal authorities.

The rarest of all the Ike dollars are the ten or twelve 1974 D coins erroneously minted on silver-clad blanks (heavy at 24.59 grams 379 Â½ grains), lately quoted at around $1,500. No information is available as yet on the degree of scarcity of the various minor varieties, though several candidates for promotion as "rare" have already been published, including the 1971S "Peg-‘Leg" proofs (serifs off the foot of R in LIBERTY owing to excessive die polishing) and the 1972 Philadelphia regular nonproof issue from the master die used for proofs (West Indies as a single super-island, indented outline around continental shore, FG free of tail). This is not to be confused with the later "Modified High Relief" coins, which are common.

On the other hand, the date 1973 has begun receiving enthusiastic collector and speculator attention. Only 1,767,691 pairs of Philadelphia and Denver coins were sold in sets, the rest melted; the 1973S silver-clad proof dollar has the lowest mintage of its kind (1,005,617), and the 1973S silver-clad uncirculated dollar has the lowest mintage of all, a little over 877,000.

Coinage of this design was halted in late 1974 so that the entire mintage of 1975-76 would consist of Bicentennial pieces. As of this writing, there is no word of resumption of the regular type. The fate of the "Ike" dollars is now in doubt owing to the recent Research Triangle Institute recommendations, which have proposed either to abolish the denomination or to mint it only in a smaller redesigned format.

In October 1973, the Treasury Department announced an open contest for new coin designs for the Bicentennial, for the first time since the 1891 fiasco which gave us the Barber silver. After nearly 1,000 entries had been received and winnowed down to a dozen semifinalists, the judges chose Dennis R. Williams's proposed dollar reverse, depicting the Liberty Bell (as on the 1926 Sesquicentennial half dollar) superimposed on the Moon. Two 5-pointed stars divide the statutory legend from the denomination; the Latin motto is placed at lower right, and the designer's initials DRW flank the clapper. The obverse, as with the other Bicentennial coins, was to be of unchanged design except for bearing the dual date 1776-1976 for the entire coinage of both years, lest coin collectors hoard quantities of both dates.

Despite enormous publicity, the dollar coins infrequently reached circulation, being no adequate substitute either for dollar bills or for smaller denominations, and being accepted by almost no vending machines other than those in Nevada which sell dreams of wealth (and many of the one-armed bandits preferred the casinos' own specially minted gaming tokens anyway).

Click here to view our current inventory of Eisenhower Dollars