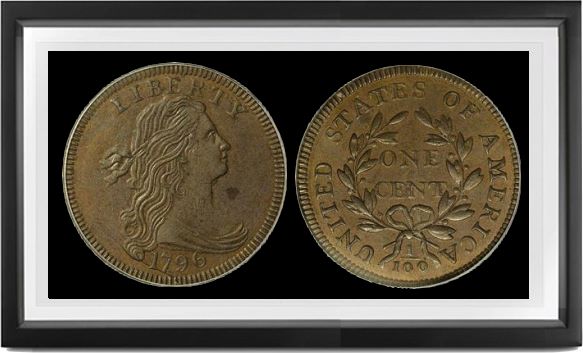 During 1796-7-8-9 and again in 1803, Mint operations had to be suspended every late summer and fall while the personnel fled the city during the annual yellow fever epidemics. Each winter, the old dies—all that could still be even briefly used—were recovered from the vaults, degreased, and hastily combined in any convenient combinations to make many small batches of cents. These "emergency" coinages include many of the most famous type coins and rarities in the series, notably all the 1798's with Reverse of 1796 (single leaves at top wreath) and many 1796's with rusted or severely broken dies.

Planchets come from a variety of sources, the best of all being the initial shipment from Boulton & Watt's Soho Mint (near Birmingham, England), represented most spectacularly by Uncirculated cents from the "Nichols Find," originally from a bag (1,000 pieces?) brought from the Mint, December 1797, by Benjamin Goodhue, formerly of Continental Congress, handed down via his daughters and their descendants to David Nichols of Gallows Hill, near Salem, Mass., by whom they were dispersed about 1863 into numismatic circulation. These are mostly 1796 S-119, 1797 S-123 and 135, with a sprinkling of other varieties (S-118, 136, 137, 104 rusted dies). These blanks were also used for some of the earlier varieties of 1798, notably 154, 155, and on occasional examples of other 1797's. However, many of the poor rough planchets and lenticular blanks found on 1796's recur on these later dates as well, the 1799 normal dates (and most 1800's) being almost invariably found on dark rough flans referred to in the Mint as "black copper." The 1799 has been highly coveted ever since the 1860's, Joseph j. Mickley (1799-1878) having begun his boyhood coin collecting hobby with a years-long search for a 1799; over half have weak dates, the remainder weak LIBERTY, and the copper evidently deteriorated rapidly.

Some 44 reverse dies of the period—the last ones of 1798; the 1799 reverse, all of 1800, 1801 A, B and E, and 1802 I—were made from a complete hub, the first used on cents, the only one prior to 1835. Mint presses were weak enough so that only a weak partial impression could be made, the dies all requiring much hand finishing, and the experiment was not repeated. When Scot had to resume making dies with only the wreath hubbed in, he began making increasing numbers of errors—the stemless, 1/000 and similar goofs becoming very famous though mostly not rare. Not less than four 1/000 dies were used in 1801! One of these was put aside and corrected in 1803. It is possible that he had an assistant enter the lettering from then on.

Most of the really interesting varieties of this design—and most of the rarest—come from the Mint's troubled years 1796-1801. After that, better steel was available for dies, which accordingly lasted longer, and the coins themselves are more durable, many more choice ones being known, the final one of 1807 (S-276, common large fraction type) being possibly commonest of all.