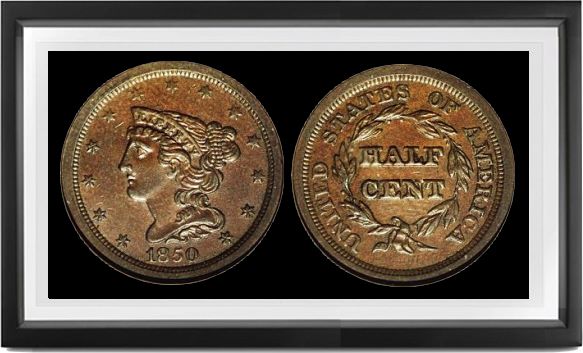 THIS IS AN UNEXPECTEDLY FRUSTRATING GROUP. Of 18 dates coined in all, 10 exist only in Proof State (originals and restrikes), the rest all in moderately low mintage, mostly very rare in red Uncirculated. We owe their existence to Director Patterson's decision to include this denomination in the dozen or so Proof sets made up each year for presentation to visiting dignitaries.

Accordingly, Christian Gobrecht made up a pair of hubs " obverse complete except for date, reverse complete though requiring hand finishing on berries—copying those used on the cents of 1839-43, the "Head of 1840." For the first nine years, a single Proof reverse die was used, one in which hand retouching had enlarged 10 of the 11 berries out of all proportion.

Of the 1840-49 Small Date group of Proof-only coins, the 1841 original and one variety of 1848 restrike (First Restrike, reverse of 1856, double outlines on CENT and ribbon) occur more often than all the rest, two dozen or more of each, despite the 1841 obverse die cracking at the very beginning of use. The first two dates of originals, when pristine, are far more brilliant than any later ones, and lighter in color; and the originals of 1840 (and a few of 1841) show that the blanks were reeded on edge before insertion into the plain edge collar—reason unknown. A dozen or fewer are traceable of each of the other Proof-only dates as originals. Some restrikes are rarer than originals, others are commoner; and a few off-weight restrikes were made using the old large berry reverse after most of the small berry restrikes (1859), including at least five 1852's with large berries, a combination never existing as originals.

Of the business strikes, 1849 Large Date is excessively difficult to find in red Mint State, though brown ones are available for a price; small hoards of spotty red coins have been found for dates 1851, 1854, 1855, 1857; the finds of 1854 and 1855 are by far the biggest. Of these hoards the largest one was 1,000 specimens in a bag, all dated 1854, turned up by the late A.C. Gies, well known Pittsburgh coin hoarder, in the early 1930's, others being below 300 apiece. All have long since been dispersed. Most of the "Unc." half cents of this period offered nowadays are EF's bathed in cyanide or one of the commercial coin dips, or processed in Minneapolis or one of the other whizzing centers.

Explanation for the noncoinage for circulation, 1836 through late 1849, is known; box 41, General Correspondence File, Records of the Bureau of the Mint (National Archives) includes an inventory of coins on hand June 30, 1848, in which one entry reads "Half cents in Vault, 5 kegs, 410.00," i.e. some 82,000 still undistributed of the 539,000 half cents of 1834-5 thirteen years after their coinage and storage. Evidently the Mint could not dispose of more than about 16,000 half cents per year.

The same cause accounts for noncoinage (save for Proofs) in 1852; orders that came in then were filled by coins dated 1851 still on hand. However, at least three different varieties of restrikes of this date were made in at least eight different occasions through 1859. The most coveted of these (5 known, one in Eliasberg collection) has the old resurrected large berry reverse of 1840-49; the commonest (over 60 known) has an 1856 die with double impressions on CENT and ribbon; the other one, with die file marks above RICA, is almost as rare as the large berry coin. Originals are not identified to date; they should weigh 84 grains apiece, whereas known restrikes come in batches weighing 78-79 grains, 81.8 grains, 87 grains and 96+ grains apiece, the last-named thick flan ones being rare.

Of later dates for circulation, only one obverse die was used per year; relative scarcity follows the mintages pretty well, though 1857 in worn state is scarcer than it should be, because quantities were melted unissued after the denomination was abolished in February 1857. Mint red examples of 1849 Large Date and 1853 are unobtainable.

The copper-nickel Proofs of 1856 sometimes met with (almost always weak) were made to show what the new alloy intended for Flying Eagle cents would look like; 50 were given to congressmen, others were made later.