THE BUFFALO NICKEL ON RAISED GROUND (1913) 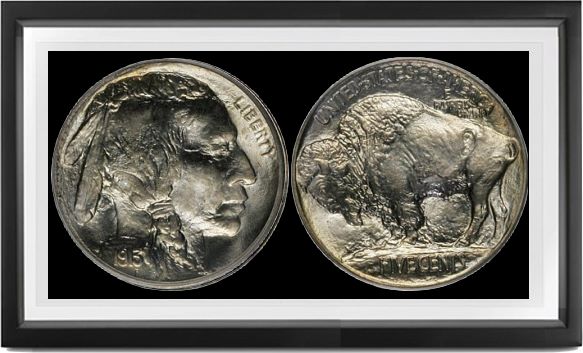 THE ACT OF SEPTEMBER 25, 1890 forbade any changes in coin design oftener than every 25 years. Secretary of Treasury Franklin MacVeagh was informed by his son on May 4, 1911 that during his term of office only one coin design could be improved without special legislation, namely the nickel 5 cent piece. The Treasury Department contacted the illustrious James Earle Fraser, who produced a pair of original models suitable for the reducing lathe, June 1912; these were promptly approved.

For obverse, Fraser made a composite portrait of three aged Indian chiefs: Iron Tail (Custer's opponent at Little Big Horn), Two Moons, and John Big Tree. The result is immediately identifiable as Indian but cannot be attributed to any one tribe. It is nevertheless the first realistic depiction of an Indian on American coinage, and except for the Oregon Trail commemorative half dollar, it is the last.

The reverse portrayed not a European buffalo but an American bison, old Black Diamond, then living in Central Park Zoo in New York City.

Interestingly enough, and perhaps more than coincidentally, the Indian and bison motifs were enjoying attention on American currency and stamps at the same time. The then current $5 silver certificates (Series of 1899) displayed G.F.C. Smillie's splendid portrait of Chief Running Antelope, and the Series of 1901 $10 Legals featured Marcus Baldwin's magnificent bison. Mention should also be made of the 1898 Trans-Mississippi Exposition stamps, of which the orange 4 cent showed a mounted Indian pursuing a bison.

Between Treasury approval of the design and manufacture of master dies, a vending machine company executive loudly claimed that the new coins would not pass his counterfeit detection device, and demanded numerous minor changes, then made similar demands even after his first ones had been acceded to. In the end, Secretary MacVeagh effectively told the Mint to proceed with the design as earlier approved, and let the vending machine companies change their apparatus instead—a praiseworthy attitude too often since forgotten.

During the monstrous fuss made by the vending machine people, two different types of experimental pieces were made, both similar to the regularly adopted Type I nickels of 1913 (bison on raised ground) but without Fraser's initial F at date. Of the first, diameter 0.839", nine survive from an original mintage of 17; of the second, 0.869" diameter (similar but with round topped 3), only one is in private hands out of four struck. Possibly some of the former may remain in collectors' hands mistaken for ordinary 1913's.

Uncirculated examples of the regular 1913 Type I survive, saved as first of their kind. Occasional specimens of the couple of thousand Matte Proofs used to be "cherry picked" at conventions where ignorantly offered as ordinary Uncirculated coins; the Matte Proofs are much sharper in central detail than business strikes, and generally have slightly broader borders with pronounced inner rims. There are no marked varieties of this type within its single year; once in a while a specimen will show light doubling at date, front minutely off-register impressions from the hub into the working die.

The design was modified only a few months after adoption because the denomination FIVE CENTS was too shallow, too easily worn off, a fact discovered as early as April 1913.