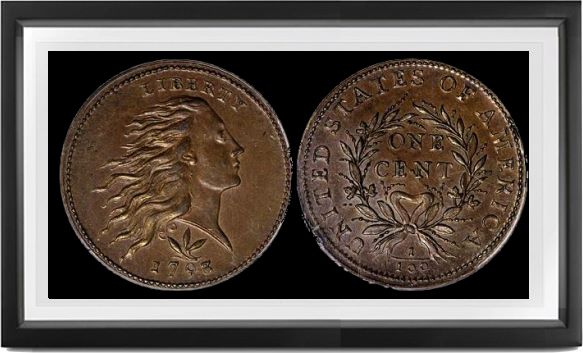 BETWEEN APRIL 9 AND JULY 17, 1793, some 63,353 cents were struck at the Philadelphia Mint, from dies made by Adam Eckfeldt with assistants, after sketches probably furnished by David Rittenhouse. These are the famous and coveted Wreath-Type cents, created in an attempt to improve the Mint's public image after some scurrilous newspaper stories ridiculing the Chain type. Unlike any other American coins, they show a leafy spring between head and date; unlike any other coins except the half cents of 1793 and the pattern cents of 1792, their berries occur in peculiar sprays. They possess a distinct personality unlike any other Mint products of this or any later year.

Which plant was represented on the wreaths has long been controversial; my own belief is that the wreath was a composite, including cotton leaves (the trefoils) and laurel, probably bay laurel (Laurus nobilis), sacred to Apollo, native to Greece and Italy, but brought to the Atlantic Coast colonies in the 1600's. In folklore, this laurel plant was associated with victory and peace, and supposedly a charm against lightning striking the place where it was hung, strewn, or allowed to grow.

The first die (Crosby 6-F, Sheldon 5) has large letters and date as on the Chain type, but this was abandoned at once as too crowded. Later dies have smaller letters and date. This first die was used at the outset on April 9 for making a small number of prooflike "specimen strikes" on brilliantly polished planchets, and a few thousand normal impressions, during which time it chipped and crumbled at the rim. At least three and possibly as many as five presentation pieces survive along with several regular Uncirculated pieces. Altogether there are seven obverse and seven reverse dies of this type, differing in the shape of the sprig; the next to last of these (misplaced first by Sheldon and Crosby, viz. Sheldon NC-2,3, Crosby 5D, 5E) has cotton leaves (miscalled "strawberry" leaves) instead of the regular laurel. Of the ten combinations known to date from these seven pairs of dies, the correct order (using the Crosby number-letter combinations, as does Sheldon) is 6F, 7F, 8F, 10F, 10I, 9I, 9H, 9G, 5D, 5E, 11J. The last of these comes, rarely, with the same vine and bars edge device as all earlier 1793's, and far more commonly with edge lettered ONE HUNDRED FOR A DOLLAR, at first with two leaves after DOLLAR, later with one leaf as on the Liberty Caps. These lettered edge coins are thought to have been included among the 12,001 struck between July 6 and 17, inclusive. (The large cent varieties, 1793-1814, are described in W. H. Sheldon's book Penny Whimsy, Harper & Bros., 1958.)

Of the 63,353 struck in all, possibly 4% survive, perhaps more as many were saved as first year of issue; in all at least 2,300 in all grades, possibly as many as 2,500; of these, over thirty Mint State specimens are traceable, with a larger number of AU's and a still larger number of EF's. This survival proportion or "Characteristic Ratio" is larger for 1793 Wreaths than for any other Early Cents prior to 1800 for which it can be even approximately ascertained, and this is almost entirely attributable to public squirreling away of well preserved ones while they were still a novelty. No hoards have been discovered, but then—unlike the Liberty Caps of this year—no abnormal selective destructive forces operated to lower the number of survivors.

Around the end of this period the Mint managed to hire the well known portrait engraver Joseph Wright, and Rittenhouse assigned him the task of improving the cent design—effectively the end of the Wreath type. Unfortunately for such plans, the first of a long series of yellow fever epidemics hit Philadelphia, and among the Mint personnel carried off by it was Wright. His design was used posthumously being preferred to the Wreaths despite the latter's somewhat primitive vigor.

The Wreaths, then, however ephemeral as a type, are unique in being the first American coin design created in direct response to public opinion, the first to be favored with the manufacture of special presentation pieces, as well as the only ones with the distinctive sprigs, and the first regular design to be made by Adam Eckfeldt.