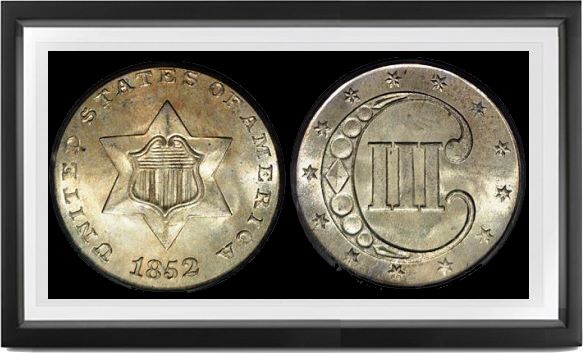 WHILE A COMMITTEE UNDER SENATOR D.S. DICKINSON was preparing a bill to change postage rates (to become the Act of March 3, 1851), the question of how stamps could be bought loomed large. Shin plasters (paper money in less than $1 amounts) were not legally acceptable, nor were state bank notes. Treasury notes were issued only in denominations of $50 up. Large cents were extremely unpopular and were likely to pile up to unendurable weight in post offices; fractional Spanish silver—when available—might have to be weighed to make certain it was genuine and within legal limits, a time-consuming procedure. American coins were virtually unavailable in denominations less than gold dollars. Giving 97 large cents in change for buying a 3 cent stamp was likely to produce a fight; cents could be refused, not being legal tender. American silver coins were now worth well over face value in terms of gold, because the California gold discoveries had forced down the world market price of gold in terms of silver. As a result, silver dollars were being coined only in minimal quantity, not reaching the public, and half dollars were being melted and resold as bullion as fast as they left the banks. Quarters and smaller silver coins were hoarded. Since postal rates were to be lowered from 5 cents to 3 cents prepaid, the obvious answer was a 3 cent coin. Senators remembered two earlier proposals for this denomination, which had led to nothing because the low-grade bullion (10% silver, 90% copper) was too readily counterfeited. Dickinson therefore wrote into his bill the provision that a 3 cent coin be issued, 75% silver, 25% copper, to weigh 12-3/8 grains. The bill passed and became law March 3, 1851, effective June 30.

On request from the Treasury, Mint Director Patterson sent samples of two different designs for the 3 cent: Peale's Liberty cap type of 1850, copied from the Gobrecht gold dollar patterns of 1836, and Longacre's design, with shield within 6-pointed star obv., III within C rev., expressing a weak and reluctant preference for the latter because it was in lower relief, therefore at once easier to strike and allowing die to last longer, The latter design was approved; the authorizing act did not mention the design, this being discretionary with the Treasury. Trimes were minted in large quantities, went immediately into circulation and stayed there, which is why the vast majority of the 1851-62 issues are found in worn state. They substituted for the vanished Mexican cuartillas and (in larger numbers) for medios and reals; they were passed in preference to large cents; they bought immense quantities of stamps, and for two years were the only readily available American coin of lower denomination other than the gold dollar, precisely because they were worth less as bullion than their face value, and thus did not reach the melting pots. Nevertheless, they were unpopular, being easily lost and having a tendency to become discolored and filthy. They were commonly called "fish scales."

Coins of 1851 occur with light and heavy dates. Seven pairs of dies were shipped to New Orleans, and the 1851-0 has become a popular type coin as the only one of its kind. It comes with very thin mintmark, normal mintmark, double-punched mintmark (very rare), very heavy mint-mark, or with dash after date (normal mintmark), the last also very rare.

Over 18 million were made in 1852, the largest mintage of the design. These also come with thin shallow date, heavy date, or double-punched date (very rare).

Those dated 1853 were all struck between Jan. 12 and March 31, coinage being stopped in anticipation of a new act of Congress which would change weight and fineness. There are light and heavy dates, but no more marked varieties.

At present only three Proofs survive dated 1851, and the only one dated 1852 traced to date is in the museum of the American Numismatic Society; not even a rumor of one dated 1853.