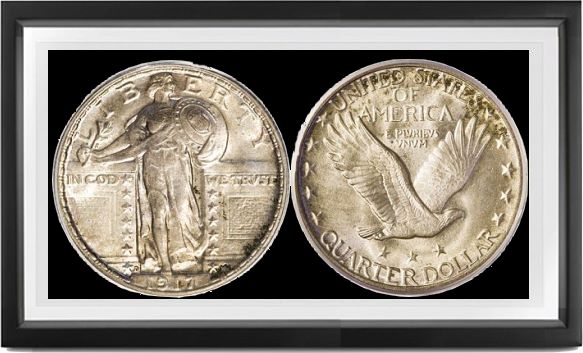 ON JAN. 11, 1917, HERMON A. MacNEIL, designer of the new quarters, wrote to Mint Director F.J,H. von Engelken requesting permission to modify the design—despite many of the coins already having reached circulation. His letter has not been located, so we can only speculate about why he wished to do so. MacNeil, at the Director's suggestion, conferred with Treasury Secretary W.G. McAdoo, and at the latter's request the sculptur was admitted to the Engraving Department to supervise the initial stages of transferring his modifications to metal. On April 16, 1917, Secretary McAdoo wrote to Rep. William Ashbrook, Chairman of the House Committee on Coinage, Weights and Measures, enclosing a draft of an act which would permit the specific modifications requested—increasing concavity of fields, repositioning the eagle higher in field (so as not to interfere with the striking-up of Ms. Liberty's head?), placing three of the 13 stars below eagle, respacing the inscriptions. MacNeil alleged that the dies, as finished in the Mint, were untrue to his original conception—in which valid claim we may see the hand of Barber at work, even as in 1913 and 1916 with the buffalo nickel, and still worse in 1907-8 on the St. Gaudens gold designs.

Ashbrook introduced McAdoo's bill on April 30, claiming that the Type I coins as made would not stack. As enacted, July 9, 1917, the law specified that no changes should be made in the devices, no modification other than those mentioned above.

However, in the meantime, some supporters of the late Anthony Comstock (notorious anti-pornography crusader, head of the Boston Watch and Ward Society, etc.) had gotten to Treasury officialdom and made threats on the grounds that the coins of 1916-17 Type I were obscene, in that they showed Ms. Liberty barebreasted. The power of these people was already well known to the Treasury, which had been forced in 1898 to withdraw nearly 35,000,000 "Electricity" $5 silver certificates for the very same reason. And so, without anything being written into law, without anything being said in the Congressional Record except that Secretary McAdoo did not like the old Type I designs, the coins as issued from 1917 through 1930 contained one illegal alteration: Ms. Liberty's décolleté was replaced by a coat of medieval chain mail—a grotesque anachronism even if one naively assumes it to have purely symbolic origin in the USA's involvement in the World War.

As a design improvement, the new type was exactly the reverse. Coins with heads struck up well enough to make out details of hair near ear are seldom encountered; true "full heads"—in which profile is clear and every hairline visible—are rare in Type II, though readily available in 1916-17 Type I. Dates are usually weak.

In this type there is only one major rarity: the 1918/17 S, through error given one blow from two different hubs at a juncture when dies were being made for both years (fall 1917). In Mint State less than six are known.

What is actually a third type was introduced at the beginning of 1925, continuing until the end of 1930 when the design was abandoned. This is marked by one major naked-eye change. No longer is the date on a raised panel where it was exposed to wear quicker than anything else on the coin, but instead it is now in a recess where it is well protected from wear. Unfortunately, nothing was done about the striking qualities; full heads are as difficult to obtain in the later years as in the earlier.

There are no major varieties and no rarities in this period. The date 1927 S has proved to be unexpectedly difficult to obtain in Mint State.