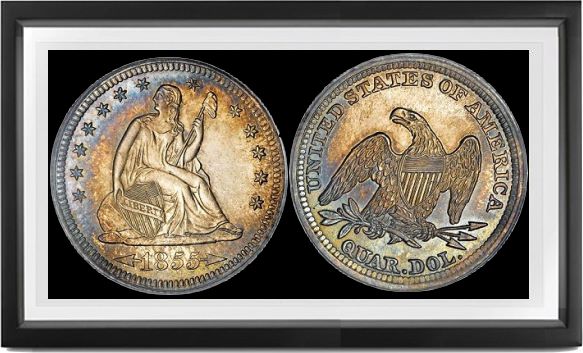 MINT DIRECTOR SNOWDEN felt that continuation of arrows flanking dates on silver coins was necessary to enable the new issues to be distinguished at once from the heavier "old tenor" ones (which were being remelted as worth some $106.60 per $100 face value). However, it came to Snowden's attention that impressing the rays to reverses represented an extra operation which necessarily increased the amount of time required to make a reverse die, and possibly diminished its life. As a result, by his orders, issues of 1854 and 1855 bore the arrows but no rays.

The number of dies made for this issue in Philadelphia is not known, but likely to have been in the neighborhood of 80 to 100 pairs, sufficient for the total of 12,380,000 struck during the year. Twelve pairs of dies were shipped to New Orleans, bearing mintmark O, for that branch's issue of 1,484,000. Again, on the off chance that the new San Francisco Branch (until December 1853 operating under the title of "U.S. Assay Office of Gold") might be in condition to issue silver coins, two pairs of 1854 S dies were shipped there, but no quarters were coined from them.

Proofs were made this year but their number is un-known; fewer than ten are traced, of which several are impounded in museums and estates.

The varieties of 1854 Philadelphia quarters are very minor; the varieties of the New Orleans issue are somewhat more notable. Apparently ten of the twelve reverses have a normally sized mintmark O, while an eleventh has a very small O (similarly to reverses from former years, but these had all been defaced June 4, 1853) and impressions from it are extremely rare. The twelfth reverse die is a freak: the mintmark O is enormous, at least as tall as the numerals in the date. To date only two examples have been reported, one of them in the Dr. Charles Ruby collection, the other offered in one of the New Netherlands "Numisma" lists in the 1950's, both worn, possibly representing one and the same coin.

The two branch mint issues of 1855 are extremely rare in Mint State. A single Proof is known of the 1855 S, this being the piece traced from Superintendent Robert Aiken Birdsall to the W.W. Long Museum, Dr. Edward Mans (1886), reappearing in New York in recent years; this was the first piece coined in California of this denomination. Snowden decided that thereafter probably too few "old tenor" silver coins would be brought in to require continuation of the distinguishing mark, so that as of January 1, 1856 the arrows were dropped from dates, though the coins continued to be issued at the same weight. This effectively ended the use of arrows on the current design.