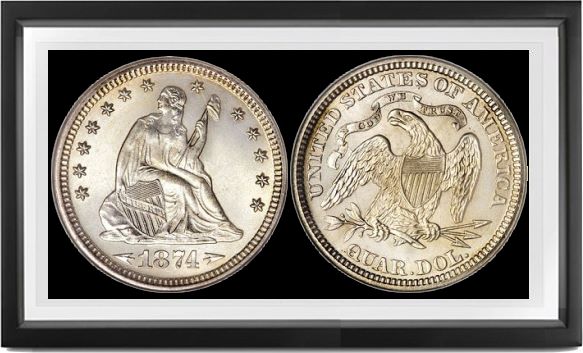 THE MINT ACT OF FEBRUARY 12, 1873, in addition to abolishing several denominations (two cents, trime, half dime, silver dollar) and moving the Directorship of the Mint out of Philadelphia and into a new specially created Mint Bureau in Washington, attempted to introduce the metric system to our coinage. Quarter dollars to be issued after the effective date of this act were to weigh 6.25 grams apiece, or 96.45 grains troy—an increase of less than 0.5%, in practice a paper complication only. As James Blish had Mr. Spock say, "A difference which makes no difference is no difference," and the increase of 0.45 grain troy is small even compared with Mint tolerances, i.e. allowable deviations in weight. If the intention was to familiarize people with the metric system, it was irrelevant; if the intent was to make coins serviceable as weights, the existence of tolerances of 2 or 3 grains (0.2 gram) either way per coin made any such attempt futile.

For reasons unknown, the new coins were to bear a distinguishing mark. This proved to be arrows at the date, exactly as twenty years previously.

The older coins were theoretically to remain current, though the incomplete records surviving indicate that quantities of no-arrows coins of 1873 and earlier dates were melted in and after July 1873 along with the abolished denominations, and that orders to melt the obsolete coins were sent to the branch mints, accounting for rarity of many 1871-73 S and CC silver coins without arrows.

The quarters of 1873-74 have long been prized as type coins. Mintages were ample: 1,339,500 business strikes in Philadelphia in 1873, followed by 471,900 in 1874; the corresponding figures for San Francisco are 156,000 and 392,000. Carson City was still under orders to limit mintages, so the coinage comprised 12,462 in 1873, none the following year. It is reasonable to call the lone Carson City issue rare, and in Mint State it is especially so. The 1873 S is very scarce in Mint State, the 1874 S exaggerated in rarity; several rolls were found over ten years ago, two of them still intact as of 1970, the others dispersed—one coin at a time—to dealers arid type collectors, in order not to depress the market level to much below the 1873 S. But among the 1,810,400 business strikes and 1,240 Proofs from Philadelphia are enough choice survivors to satisfy type collector demands, and the coins are available for a price.

Some 500 Proof sets with arrows (dimes through halves plus trade dollars) were minted in 1873, with 40 extra quarters; quarters with arrows were added to existing Proof sets without arrows, but by far the majority of sets went to date collectors who broke them up to add the new issues to their date sets of dimes, quarters and halves; similarly with the 700 sets of 1874. Existing Proof sets were mostly reassembled in recent years.

The new metric weights continued through 1964, but their importance to the mint and the general public has been effectively zero.

Numbers of dies of coins with arrows have not been ascertainable. There are no major varieties in any of these; all have the open 3, all S mint coins have tiny mintmark (one die has this S first cut too high, then corrected-1873 only).