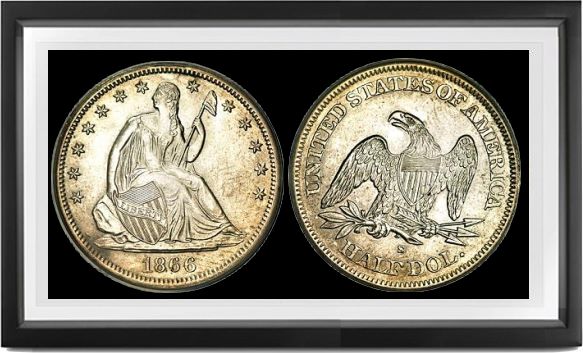 THE OBVERSE ADOPTED AUGUST 13, 1839 is a reduced copy of that on the silver dollar, showing Liberty seated in the original Sully-Gobrecht version, with stars around. Reverse is similar to previous types but inscription is in smaller letters, slightly larger than those used in 1836-37. The first obverse die shows no drapery at crook of elbow; later dies through 1891 show a fold of drapery there, but it is nothing like the bulky cloak on the Robert Ball Hughes modification. Only on the half dollars does the Sully-Gobrecht conception continue, and—far from coincidentally—only on this denomination are sharp strikes generally found. Coins from the "no drapery" die are very rare in top grade, full Mint State examples being for years so rare that their existence was controversial, and fewer than six being known even now in that quality, aside from the single Proof. Coins of 1839 from the "with drapery" obverses (at least three are distinguishable by minute variations in date position) are rare in Mint State but not nearly in a class with preceding. In all, some 1,972,000 were struck.

The small letters reverse continues through 1841, and is found on the first 1842 O's, which also have small date; these are believed to have formed a small part of the initial delivery of 203,000, and they are almost impossible to find above Fine condition, There is one other rarity in these years, the 1840 with a badly cracked reverse of the 1838-39 type (larger letters).

In 1842 and on all later years, a new reverse hub was put into use, with large letters, larger than any heretofore in use since 1833. Issues were fairly large until 1850, the mint's principle output consisting of cents, half dollars, and half eagles.

Gobrecht died July 1844, being succeeded Sept. 16 by James Barton Longacre, (a banknote plate engraver without diesinking experience), through John C. Calhoun's influence. Owing to mechanical improvements by his predecessors, which totally mechanized diemaking, Longacre's duties 1844-49 consisted almost entirety of punching dates and mintmarks, at which donkey work his hand faltered, producing double dates, triple dates, overdates and blunders such as 1846 over lazy 6; most are rare. The "no drapery" dies of 1845 O, 46 O and some other years are from excessive lapping or regrinding of dies.

Discovery of gold in California resulted in a rise in world silver prices in terms of gold until 200 half dollars melted into bullion would buy not $100 but 106.60+ in gold, exchangeable at face for silver coins, resulting in their vanishing from circulation. Mintages were low 1850-52, survivors rare; of 1853 O "no arrows" only two are known, both barely Good.

Later years through 1866 S no motto include many scarcities from San Francisco, though the dates 1861-65 S are common in cleaned EF from a hoard found in Guatemala; the 1866 S no motto (60,000 coined) is very rare in all grades, extremely rare in Unc.

In 1861 the Confederacy took over the New Orleans Mint, coining some 2,202,633 halves from Union dies, and with one rare exception, are indistinguishable from the Union issue. This exception shows a die crack from rim to nose, the same obverse earlier used for making the four original Proofs with A.H.M. Patterson's Confederate reverse die (April 1861).

Philadelphia coins from 1859 on have a new reverse hub with shorter thinner claws, arrowheads more widely spaced apart, and more delicate letters, until about 1863 the branch mints used leftover dies so that the new hub is first seen on S mint coins in that year.