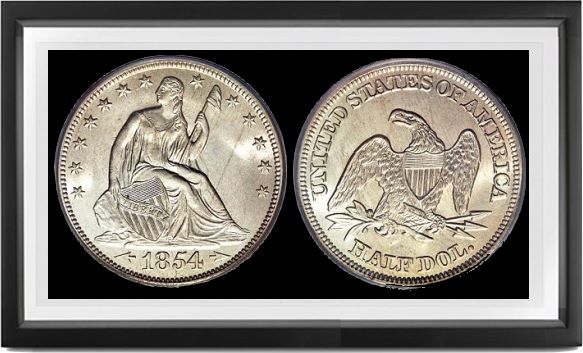 THE INCOMING MINT DIRECTOR, Col. James Ross Snowden, ordered that henceforth quarters and half dollars, which had been coined in 1853 with arrows at date and rays around eagle on reverse, should be issued with arrows but without rays. Though documentation is lacking, we may surmise that his reasons included saving cost and tune in die making by omitting the extra impression for each reverse, and increasing die life, which was very low in 1853 (much less than half the pre-1853 average of nearly a quarter-million impressions).

Two pairs of half dollar dies were shipped to the new San Francisco branch in 1854, but no coinage ensued. Later in the year word reached Philadelphia of a local source of parting acids so that gold and silver coins could be issued at legal fineness, and accordingly six obverse and four reverse dies were shipped for half dollars. In 1855 some 129,950 halves were issued. At least three Proofs are known to survive from the small handful made on inception of the denomination; one of these is in the Smithsonian Institution, from the Mint Cabinet collection, presented thereto by Superintendent Robert Aiken Birdsall, two others having appeared at auction in the 1950's.

There are no major varieties for 1854 from either mint, though several different recut dates are known from both Philadelphia and New Orleans, plus one die with triple cut date (O mint). For 1855 recut dates are known for Philadelphia and New Orleans, and from Philadelphia there is also the recently discovered 1855/4. This has a normal level 1855 heavily punched over a light 1854 which slanted down; the die was evidently reground shortly afterwards so that only part of loop of 8 shows within 8, and only fragments of upright and crossbar of 4 within 5, and even these quickly fade out. Specimens in which crossbar and foot of 4 both show are of the highest rarity.

For 1855 S there are varieties with and without drapery from elbow. As with other "no drapery" dates in the forties, fifties and later decades, this variation arises from too-vigorous die lapping, probably to remove clash marks.

As one could expect from the mintages, none of these coins can be called rare (aside from the overdate) except the 1855 S, and that one is extremely rare in Mint State, though it is not too hard to find for a price in worn condition. The S mintmark is quite large.

Snowden thereafter decided that in later years too little "old tenor" silver was likely to be brought in for recoinage, so that continuation of the distinguishing mark would no longer be necessary, though half dollars would of course continue to be coined at the new weight. Effective January 1, 1856, there would no longer be arrows beside the dates.