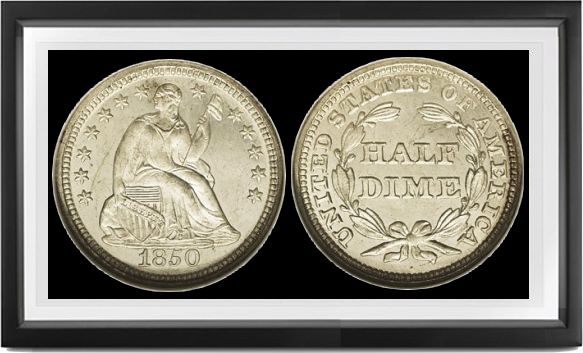 FROM JANUARY 1838 THROUGH NOVEMBER 1840, half dime working dies were made from the old "No Stars" hub of 1837, with stars being punched individually by hand into each die (about 18 obverse dies in all for Philadelphia, 10 for New Orleans). As a result, the stars vary notably in spacing, never being completely even; they also vary slightly in size according to how heavily they were hammered into the dies. One die of 1838 has unusually small stars, but the explanation for this one seems to be that the die was over-vigorously ground down to remove rust, which still remains (as minute lumps) on Ms. Liberty as well as drapery and shield. In all 4,218,150 were made (1838-40) in Philadelphia of this design, an additional 1,606,550 in New Orleans, after which the old hubs were abandoned in favor of an alleged improvement.

This was the new design of 1840, popularly "With Drapery," by the Anglo-American miniaturist Robert Ball Hughes. His totally redrawn conception of Ms. Liberty fattened her arms, enlarged her head, replaced the décolleté by a high collar, flattened her contours, chipped away much of her rock, moved the shield to an upright position, enlarged the ribbon with her name on it, and—for no imaginable reason other than concealment in the name of "respectability"—had her carry a bulky cloak or himation over the elbow of her pole arm. This new design first appeared on the silver dollars, then on quarters, dimes and half dimes in 1840. As a design improvement it was a dismal failure; the coins struck from it seldom show full details of head and drapery even in pristine Mint State. The hubs of this design had the stars already in them, so that no further variation occurs in star positioning from now on, and in fact the only major variation occurring in this period (1840-59), aside from the arrows of 1853-55, are in the numerals of dates, which had to be added by hand. At this blacksmith's chore, Mint Engraver Longacre (by profession a banknote plate engraver) was timid and inefficient, making many blunders, some of which have become famous: double dates for 1843, 1844, 1845 (one variety often mistaken for an overdate, 5 supposedly over 3), 1858 and some other years. There are also several overdates for 1849, the small set of numerals 1849 being punched over the partly effaced traces of a much larger set of numerals, 1846 or 1848. Possibly the most notorious of these blunders shows a normal date 1858 punched over traces of an originally inverted date (the logotype or gang punch being rotated 180°). A famous blunder of a different kind is the rare large date 1848, the wrong logotype (intended for dimes) being used here, filling the available space and markedly overlapping the rocky base just below Ms. Liberty's floor-length draperies. There are at least three different sizes of mintmark O.

Most of the mintmarked coins of this type (prior to 1853 with arrows) are rare in full Mint State, as they continued to circulate, freely at 6 Â¼ cents apiece at par with Mexican medios.

Coins of 1856 normally show weak border dentilations. In an attempt to correct this and other weaknesses the old obverse hub was softened, retouched and rehardened; the 1857-58 and 1859 O coins made from dies sunk from the retouched hub show more drapery detail near pole, and a dent on innermost part of 3rd star (counting lower left star as first). This was at best a temporary stopgap, and in 1859 a new hub was used for Philadelphia dies only (and for the 1860 piece de caprice with similar obverse and new reverse without our nation's identity: 100 minted for collectors on Mint Director Snowden's orders). This single-year modified type, by Anthony C. Paquet, was never copied on other denominations; it has hollow stars, slimmer arms, smaller cap, larger head, different coiffure, different profile and drapery folds. The next year it was replaced by a Longacre revision in which the UNITED STATES inscription replaced the stars.