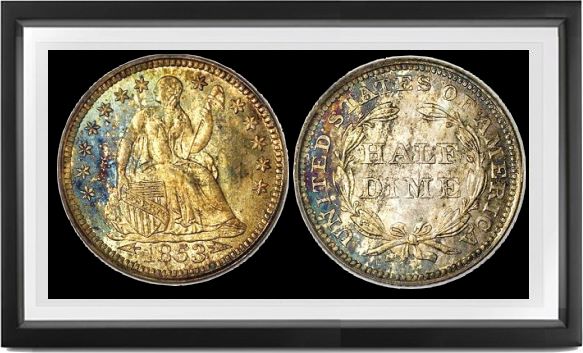 THE DISCOVERY OF enormous quantities of gold in California in 1848 had the immediate consequence of lowering its price reckoned in terms of silver, or (what is the same thing) forcing the price of silver to rise in terms of gold. And within a couple of years almost no silver coins were to be seen in circulation; some were hoarded, but the vast majority were melted as soon as the price rise meant that they were worth more than their face value in gold. This situation rapidly began to work hardship, as nothing was in circulation between the extremely unpopular large cents (which were not legal tender and thus could be refused by storekeepers) and gold dollars. Into this gap came an inundation of irredeemable privately made scrip or "shinplasters"—worthless paper notes allegedly promising redemption on demand in silver, if one could ever find the obscure banks in obscure towns where they were issued, or if one could catch the issuing merchants before they moved out of town or went out of business.

Nothing quite like this had happened in American history, and nobody quite knew what to do about it. Eventually Mint Director George N. Eckert (1851-53) hit on the expedient of reducing the weights of subsidiary coins (silver coins of lower value than the dollar) to a point at which it would be no longer profitable to melt them down. He managed to persuade an uncomprehending Congress that this would work, and accordingly on February 21, 1853 an act was signed into law reducing the weight of the half dime from 20.8 grains (= 1.34 grams) to 19.2 grains (=1.24 grams), with the larger silver through the half dollar reduced in proportion.

There was no time to make samples of new designs for Treasury Department approval, yet it was absolutely essential to distinguish between "old tenor" and "new tenor" silver coins as issued from the mints, and as they would be later brought in for redemption and remelting. The obvious answer was some kind of distinguishing mark. Eckert devised the idea of affixing arrows flanking the date, and ordered Longacre to prepare the necessary punches and use them for all "new tenor" dies, i.e. those for coins to be struck on the new reduced weight standard.

Between January 1 and March 31, 1853 some 135,000 half dimes were struck (without arrows at date) in Philadelphia, an additional 160,000 at New Orleans. Existing Uncirculated specimens of the former are preserved to collectors due to the efforts of H. P. Newlin, the early specialist in this series; the New Orleans coins are excessively rare in Mint State, and usually are very weak at dates. Nearly the entire issue went into the melting pots, of course. Coinage was stopped immediately pending the new law's going into effect; Longacre was preparing the new dies, about 80 obverses for 1853 alone. Eckert resigned, being replaced by Thomas M. Pettit. During the remainder of the year some 13.2-million half dimes were minted with arrows at Philadelphia, and 2.2-million in New Orleans. These coins promptly went into circulation and stayed there, for which reason they are not too often seen in perfect Mint State; for many years coin dealers would not stock them in any condition because they were so common in Good to VF, and they were neglected in the higher grades. The use of arrows continued through the end of 1855, many of the coins being made from bullion obtained by melting down "old tenor" silver. Uncirculated specimens of 1854 and 1855 are a little easier to obtain than those of 1853, as by then there was an abundance for all circulation purposes, and some of the coins remained in bank sacks. The 1855's, however, are often rather weak at border dentils and sometimes also at dates.