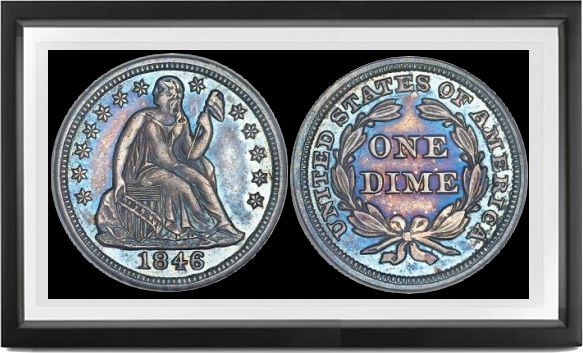 THE DIMES OF 1838-39 through November 1840, popularly "Without Drapery," were made from the old No Stars hub of 1837, each working die having stars individually added by hand, often irregular in spacing.

What is apparently the first of these dies has unusually small stars, from the punch regularly used on half dime obverses. This 1838 Small Stars variety, discovered by Howard Newcomb before 1914, is very scarce, was long unrecognized, and is thought to have comprised some part of the initial delivery of 30,000, March 31, 1838. A larger star punch was used through 1840.

Some dies of 1839 give the superficial appearance of an overdate, though we have as yet seen none with unequivocal evidence of an 8 within or around 9. In all, 4,026,615 No Drapery dimes were coined in Philadelphia, with an additional 2,296,672 in New Orleans, after which the old hub was abandoned in favor of what was erroneously expected to be an improvement.

Late in 1840 Mint Director Patterson ordered that the dimes follow the half dimes and quarters in adopting the new Robert Ball Hughes modified effigy, first seen on the silver dollars of the year. This new conception of Ms. Liberty, like its smaller counterpart, has fatter arms, larger head, flatter contours concealed by bulkier drapery, smaller rock, less décolleté shield more upright with enlarged scroll bearing her name, and the useless (save for additional concealment) bulky himation or shapeless cloak over her elbow, making her pose holding the pole seem far more uncomfortable. Some 377,580 were struck at the end of 1840 from the new obverse, far larger quantities in later years. Like the half dime, but none of the larger denominations, the dime obverse shows a heavy pendant pulling drapery down to nearer the ground; like all the other denominations from now on, stars are in the hub, their position fixed until the design was abandoned in 1860 in favor of the new one with inscription replacing the stars.

As a design improvement, the Hughes type ("With Drapery") was worse than nothing at all; like the half dimes, most specimens come weak at heads, showing flat areas on hair and parts of drapery even in full Mint State. The only major variations occurring from now on through 1860 are in position of date (which had to be added by hand), aside from the arrows of 1853-55. Reverse design remained unchanged in major details, though there are three different sizes of O mintmark.

The need to punch in dates by hand allowed considerable variation, even as in other denominations. At this blacksmith's chore, Mint Engraver Longacre was timid and tentative, making many mistakes. Double dates are known for 1843, 1844 and some later years through 1856, though no major blunders. The 1841 without drapery at elbow is not a reversion to the old hub, but a drastically lapped die used on a few Proofs of this year; less than five pieces are traced.

The low mintage date 1844 has been hoarded, and is really rare only in Mint State. The dates 1849-53, no arrows, are scarcer than their mintages would indicate, because many were melted as worth above face owing to the rise in world silver prices following discoveries of gold in California. Large date coins of 1856 (believed to comprise part of the 150,000 initial mintage of the year) are scarce. Early S mint coins through 1860—the final issue with stars on obverse—are very difficult to find in Mint State, some being unknown in that grade. Price scales in California insured that silver coins functioned very well, and as a result they generally come well worn.