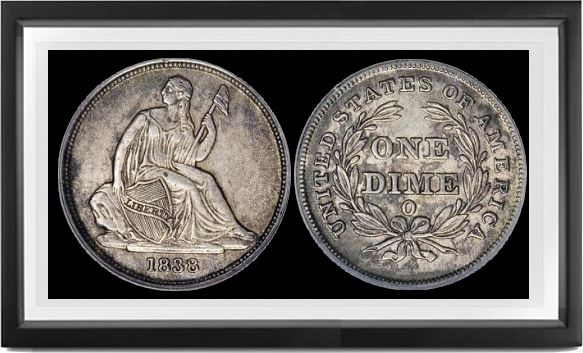 IN GREAT TRIUMPH, on June 30, 1837, Mint Director Robert Maskell Patterson ordered the newly completed Gobrecht dies to be placed into the dime press and some 30 brilliant Proofs struck for presentation to Treasury Department officials and other VIPs. About twenty of these Proofs survive today, some of them badly cleaned or scratched up; one of them is in the Smithsonian Institution, from the Mint Cabinet Collection, into which Chief Coiner Adam Eckfeldt had placed it. The obverse die is the same one later used on production coins for circulation, with large date and flat topped 3; the reverse is a different die, with a tiny spur from border above first T of STATES, but in other respects it identically matches the other reverse dies of this design.

The new design represented a further triumph for the Mint's mechanization plans. Obverse showed Gobrecht's rendering of the Thomas Sully design showing Ms. Liberty seated on a rock and holding a shield bearing a scroll inscribed with her name, closely following the device of the dollars coined in December 1836 and March 1837; the field is plain without stars, and the only detail that had to be entered into the working die by hand was the date. Reverse, for the first time in the Mint's history, had been successfully transferred in entirety by hubbing onto each working die; the simple laurel wreath—more delicate than its later copies by Robert Ball Hughes and Longacre—enclosed the denomination, our nation's identity surrounding the whole. In 1798-1801 the Mint had attempted to make reverses wholly by hubbing, but the forty-five cent reverses so made by this process all had to be so much strengthened by hand afterwards that the experiment was abandoned, even as with several half cent reverses in 1794.

In all 682,500 dimes were made of the new Liberty Seated design in 1837, aside from the thirty-odd Proofs. Somewhat less than one third of the mintage consisted of coins with a much smaller date and round top 3, similar to 1838; this variety is rarer in all grades. The large date coins were saved as first year of issue, and they are available in Mint State at a price.

For reasons unknown, no Philadelphia dimes were made without stars in 1838; however, two pairs of dies of this date without stars and with mintmark O were shipped to the newly operational New Orleans branch mint. Owing to incredible mismanagement, illness of key personnel, various defalcations and replacements of workmen, etc., coinage was delayed and its true amount not known until recent years. Thirty specimens were struck May 7-8, 1838, for presentation purposes, ten going into the cornerstone of the New American Theatre in New Orleans, the other twenty being distributed to mint officials and local dignitaries. The 489,034 production coins in addition to the mentioned thirty (489,064 in all) were made in two batches, 367,434 in June-July, the remaining 121,600 in January 1839. These dimes went at once into circulation and stayed there, almost none being saved as souvenirs; the superintendent of the New Orleans branch mint explained in later correspondence with the Director that these coins were in demand, passing readily above face at par with Spanish or Mexican one-real pieces, officially valued at 1/8 dollar or 12 Â½ cents apiece. As a result, specimens of this mintage generally come well worn, and Mint State ones are extremely rare, far more so than one might expect from the low quotations in standard reference books. An additional factor in the difficulty of obtaining choice ones is that—as with the half dimes—die deterioration rendered obverses of one variety abnormally weak and rough, so that after only brief circulation the coins look wretched.