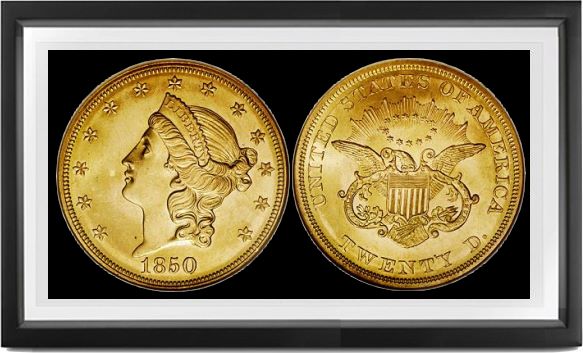 ONE OF THE NUMEROUS CONSEQUENCES of the immense discoveries of gold in California was an inordinate increase in the amounts of gold coming into the Philadelphia Mint for coinage; the authorities felt that transactions, domestic or international, involving large sums payable in gold, should be made in more compact form than half eagles or even eagles. Congress, acting on this belief, passed the Act of March 3, 1849, authorizing the manufacture and issue of double eagles—coins of $20 denomination, weighing a little over a troy ounce each, and roughly comparable in value to several major Latin American denominations.

Mint Director Patterson, aided at every turn by his officious friend Franklin Peale, seized on this as an opportunity for ousting Longacre from the Engravership. (The basis of Patterson's objection was ostensibly technical—Longacre, like Scot and Gobrecht before him, was a portrait engraver, not a diesinker—but actually political: Longacre had succeeded to the Engravership through the influence of Senator John C. Calhoun, a name anathema to the Patterson dynasty.) After completing the gold dollar dies, Longacre produced a model for Ms. Liberty's effigy, based on one of the Greco-Roman statues of Venus, only to find that Peale condemned it at once as too high in relief to stack. He then started over, late fall 1849, with the aid or one P.F. Cross, under conditions of continuous severe harassment; this time the work went as far as a master die when Peale announced that it broke on the first trial. A new die was made from the master hub, and at least two, possibly three or more, gold pieces were made dated 1849, just after Christmas; one of these went into the Mint Cabinet (now in the Smithsonian Institution), another to Treasury Secretary William M. Meredith, from whose estate (via his descendants) it went to Philadelphia dealer Stephen K. Nagy, thence to unknown parties. A brass gilt impression was later made for R. Coulton Davis, the Mint's friendly neighborhood druggist who kept the personnel well supplied with laudanum (tincture of opium), their then favorite turn-on. At least one or two were made in gold from undated master dies, one of which impressions Longacre vainly tried to buy from Franklin Peale; these are unlocated, though at least 2 or 3 silver impressions are known. In the meantime, on Christmas Day, Patterson clandestinely offered the illustrious Charles Cushing Wright the Mint Engravership, and was accepted; but Longacre got wind of it at once, and enlisted Senator Calhoun's aid in retaining his commission. As of late January 1850, the first production coins finally appeared. At least two Proofs were made (they were last reported in the Longacre estate auction, 1870); several pristine Mint State specimens are known, evidently saved as the first of their kind. However, these coins were made to use, and most survivors are thoroughly bag-marked.

No design changes are noted on the reverse, which is in low enough relief that even Peale could not fault it; its double scroll was conceived by Longacre as symbolic of the denomination, its glory (stars in rays) deliberately recalls the Great Seal of the USA. In 1858 a new hub was put into use, but the changes are very minor—mostly in the position of Ms. Liberty's name on her beaded coronet, and microscopically in hair.

Proofs were made of all years 1858-1865 inclusive, mostly in infinitesimal numbers—at most four 1858's being known today, the others not much commoner. Philadelphia and San Francisco Mint coins are not rare in ordinary condition, aside from the abortive Paquet reverse of 1861 (of which more below); but all the New Orleans dates 1850-61 are scarce, most very rare, the 1854 O and 1856 O among the prizes of the denomination. The first twenty made in the San Francisco Mint, 1854, went to the Mint Cabinet; it is a brilliant Proof. Most of the last New Orleans issue, 1861, was made under Confederate auspices; as the same dies were used before and after the CSA seized the mint, it is in general impossible to distinguish Union from Confederate strikings with absolute certainty.

In an abortive attempt to improve the design, Assistant Engraver Anthony C. Paquet in 1860 produced a modified reverse with much taller, narrower letters. This was accepted but as soon as the Philadelphia coins went into production, January 5, 1861, it became apparent that the border was too narrow, the coins too quickly exposed to inordinate abrasion, The Director telegraphed the San Francisco branch to use old reverses rather than the new Paquet dies, but by the arrival of his wire, some 19,250 had already been issued, of which a few dozen turned up in Europe during the 1950's. Only three Philadelphia coins are known with this reverse.

The last coins issued without motto were some 120,000 at San Francisco during January-February 1866 before the new motto dies arrived. Aside from the Paquet issue, they are the rarest San Francisco double eagles of this type.