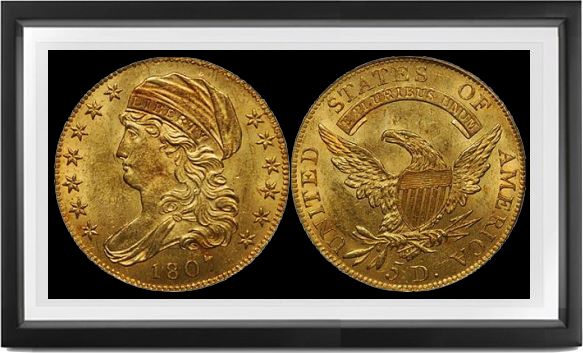 ACCORDING TO MINT DIRECTOR James Ross Snowden (1860), the change from the old Scot heraldic design to the new john Reich design took place September 30, 1807, some 51,607 being coined during the remainder of the year from one obverse and two reverse dies. The first, and far the rarer of these, has leaves far from U and 5, and it promptly cracked through E of STATES down to eagle's head; the other variety is usually available for a price, it and 1810 Large Date, Tall 5 and 1812 Wide 5 D constituting the majority of survivors of this design. All obverses by John Reich on every denomination from the half cent through the half eagle show lowest star at right with one notched point; this seems to have been his substitute for a signature. On the half eagles it is found through 1815; Reich left the Mint March 31, 1817, after exactly ten years without a pay raise and with much professional jealousy from Robert Scot. The date 1808 is notable mostly for two different 1808/7 obverses, the rarer of which shows 7 at left part of 8. All 1809's are from the same obverse, which was originally 1809/8, but whose underdigit 8 becomes faint and finally invisible owing either to die wear or effacement. In 1810 the vast majority seen are large date coins with tall 5, mentioned above; the large date with small 5 is extremely rare, far more so than any current catalogue listings. Small date coins with tall 5 are rare but not in the same class; small date small 5 coins are extremely rare, though possibly a few more are known than of the large date small 5. In 1811 we find tall and small 5's, not much difference in rarity being noticed between them; in 1812 only the small 5's close or wide, the latter common, ending the series with this draped bust portrait. The mintage figure of 58,087 for 1812 is evidently too small, as the coins of this date are much commoner than those for 1811 for which nearly twice as many are reported minted; presumably the majority of the 95,428 reported for 1813 actually bore the date 1812. It appears that approximately 1% of the mintage of each year survives today; this estimate is arrived at by a variety of analytical comparisons using the Sheldon quantitative rarity scale, and making the two assumptions that no abnormal destructive forces have selectively acted on any one date or variety, and no hoards have swelled the numbers of any one variety. The 1% figure means that from a few hundred to a little over one thousand survive of each of these dates—a proportion enabling fairly accurate comparisons of the rarity of each date with that of its neighbors; a proportion actually not far from the figure found for a variety of other denominations of this period. The only peculiarity noted among the survivors is that in this period the majority of survivors, unlike those of the mid-19th century, are in excellent preservation, very few corning less than fully Very Fine, and a disproportionate number in the range from Extremely Fine to About Uncirculated. This does not spell out hoards but rather suggests that the survivors were early put away as heirlooms or in banks' cash reserves, then in later decades cherished as quaint, old-fashioned, worth intrinsically more than later half eagles, finally as antique and rare; they simply did not circulate for more than a few months if that long. Behind this is the recognition that in their own day they could have formed only an infinitesimal part of circulating gold, most of which was foreign—Portuguese escudos and 4000 Reis coins, French 20 and 40 Francs, British guineas, Spanish and Mexican escudos, and occasionally Dutch trade ducats. In the floods of these trade coins, an American half eagle would have stood out like a swan in a flock of crows, probably being putted out as an oddity, though like all the rest, the more worn ones eventually went to the melting pots in 1834 when the official weight of American gold was lowered. But enough were made that even at a 1% survival ratio most collectors can eventually hope to own at least one.