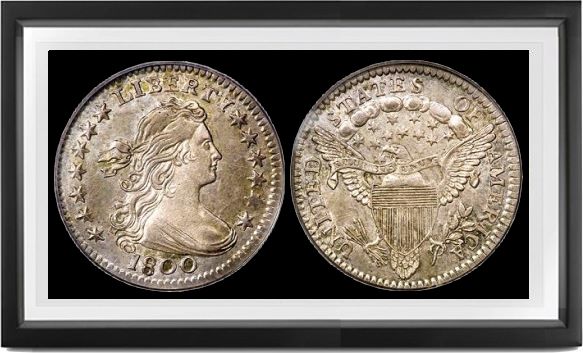 AS ALWAYS, THE SMALLEST DENOMINATIONS were among the last to receive the dubious benefit of design changes. The heraldic eagle device, adopted first for the gold quarter eagles of 1796, then used on half eagles and eagles in 1797, on dollars and dimes in 1798, was extended to the half dime in 1800, giving a more crowded appearance to this denomination than to the larger ones. The only date of this type which can be had even for a price in full Mint State—unless you are willing to wait a generation or longer—is 1800. For 1800 three obverses are known, with a single reverse die (S equidistant between wing and adjacent T). What is probably the first of these is still unique and the only die of the period with a tall perfectly formed 8; the other two 1800 dies (normal and "LIBEKTY"), the 1802 and the large date 1803, have a peculiar 8 made by punching in two small circles slightly overlapping, whereas the two 1801 obverses —and the 1805—have a crudely formed narrow 8 looking like a schoolboy's effort, the 1803 small date die a better formed one. The three varieties of 1800 follow: New, unknown to Valentine (in his listing of varieties of this series). Tall perfectly formed 8, first star very distant from curl. Unique; ex Straus estate, lot 438, New Netherlands 53rd sale. No rumor of a second one. (The V-numbers that follow indicate varieties, from D. W. Valentine, The (U.S. Half Dimes, American Numismatic Society, 1931.) V-1. Usual 8 of overlapping circles; perfectly formed R. Borderline R-3. This and the preceding believed to constitute the 24,000 coined in 1800; several Mint State specimens in various stages of cracked reverse die, also with rim break below 00. V-2. "LIBEKTY," peculiar broken R. punch. Reverse not only cracked but with heavy injury (clash mark) at BUS on scroll. Very few Mint State examples reported. High R-3; believed to be the 16,000 reported at beginning of 1801. Two varieties of 1801: V-1., first 1 in date touches curl, obverse develops break in field from Y to last star and bust; nearly R-6, unobtainable in VF! V-2, very similar, first 1 free of curl; break develops between lower drapery and border, crack through IBERT, heavy break later at RT, later another break through 18 to bust, finally extending up through curls to B. R-5, generally found in Poor to Fair, unobtainable VF. Mintage of both varieties believed 27,760 (including 9,950 reported at the beginning of 1802). Always weak in central and upper reverse. The 1802 is the most famous date of all. Only one variety: large 18 as in 1800, closely spaced, 1 free of curl, large 2 leaning left, TY below R below E; reverse of 1801, first S nearer to T than to wing; leaf touches C, not A. Later, crack through TE(D), rim breaks above TED and below tail. Any not matching the above die description (aside from breaks) are counterfeits. Two known in AU (one in Johns Hopkins University), a third EF plus, five others EF/VP, possibly four others in VF, the rest from Poor to Fine. Rarity has been exaggerated in all grades. Of 1803 three varieties were made, 37,850 struck in all. The first, V-3, has small date with a small narrow 8, reverse of 1801-2 (leaf touches C); almost R-7, almost always with rim breaks to right of 8th star and below end of drapery. V-1 has a large date with large 8 similar to 1800, and same reverse as 1801-2; unknown in Unc., usually worn, probably R-5. The last, V-2, mules the same obverse with a new reverse, reused in 1805, with leaf touching final A, not C. R-3, but very rare in upper grades. The 1805 is almost as coveted as the 1802. Only one variety: small misshapen 8, similar to 1801; later with rim break below date. Mintage 15,600; almost unobtainable above VF, there being one Uncirculated. (Merkin sale, September, 1968), one AU (ex Parmelee, 1890), two others EF, two others almost EF, the rest in VF or lower grades. Mintage discontinued, reason not clear but believed to have been lack of demand for the denomination, Spanish and Mexican medios or half-real pieces being preferred as well as being equally legal tender.