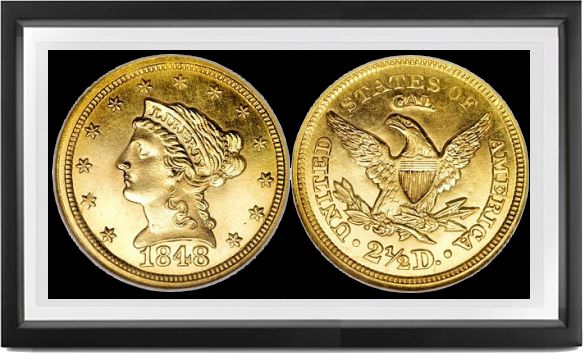 IT IS DOUBTFUL IF EVEN CHRISTIAN GOBRECHT suspected that his final modification of the quarter eagle design would outlive him by over sixty years, becoming one of the most familiar and unchanging national concepts since the Spanish Pillar Dollars. Ever since late 1834, first William Kneass and then Gobrecht had been experimenting with designs of all the U.S. coin denominations, trying to arrive at a version which would be completely satisfactory and could thereafter remain stabilized. On the eagles this result was obtained in 1839, and the head then adopted was reduced and modified for the half eagles and quarter eagles—in the former to require further modification in letter size, but in the latter no change at all. Not even the adoption of IN GOD WE TRUST on the larger denominations in 1866 was to affect the quarter eagle, which went on looking in 1907 much the way it had in 1840. In actuality, minute modifications were made on the reverse in 1859 on Philadelphia coins, extended to new dies for the branch mints in later years; but they cannot be told apart except On comparison and even then only with a strong glass. Dates were in very small figures through part of 1843, thereafter larger though variable; the difference on 1843 is marked enough so that the Charlotte and New Orleans coins of that year, which come with both small and large dates, are regularly collected as type coins, Mint marks vary markedly in size and shape through 1878. In all other details the dies were completely flubbed to minimize variation, as an anti-counterfeiting device. In 1848 some 230 oz, native bullion from the new California bonanzas came to the Philadelphia Mint from Secretary of War Marcy, who had received them from Col. R. B. Mason, then Military Governor of California, Marcy instructed that the gold was to be coined into specially marked quarter eagles, over and above the amount required for the Congressional medals just authorized for Generals Winfield ("Old Fuss and Feathers") Scott and Zachary'Taylor. As a result, some 1,389 quarter eagles were made in December 1848 from this bullion, each one stamped CAL. above eagle; they have become highly coveted rarities. However, rarities in the quarter eagle series of this long-lived design are mostly either low mintage Charlotte or Dahlonega coins prior to 1861, or low mintage Philadelphia dates made during the Civil War and the postwar decade while specie payments were still suspended and little gold was shipped to the Mint for coinage. Several of these dates have become very famous: 1854 S, the initial issue from the San Francisco Mint, consisting of 246 pieces (coinage being interrupted pending solution of the problem of obtaining parting acids to bring the silver content of California gold down to legal limits); 1856 D, only 874 minted, reason unknown; 1863, only 30 coined, all Proofs for collectors; 1875, only 400 business strikes and 20 Proofs coined, the business strikes now rarer than the Proofs. (Business strikes were meant to spend, Proofs were meant for collectors.) But probably the most famous date of this design is 1841, of which no mintage record survives, At present ten specimens are traced, five being Proofs, the other five evidently struck as Proofs but spent by later owners; the date was unknown to exist outside the Mint Cabinet collection until 1909. Specimens of the later years 1878-1907 are generally available for a price, Uncirculated examples being recovered in recent decades from British, French and Swiss banks, so that even rare dates like 1881 and 1885 are more easily located than some issues of larger mintage of previous decades. A discovery of recent years which has remained an extreme rarity is the 1862 over 1861, with a comparatively plain overdate; a treasure trove of this kind continues to remind collectors that other such discoveries sill probably await detection even in such a well-explored series as the Coronet quarter eagles.