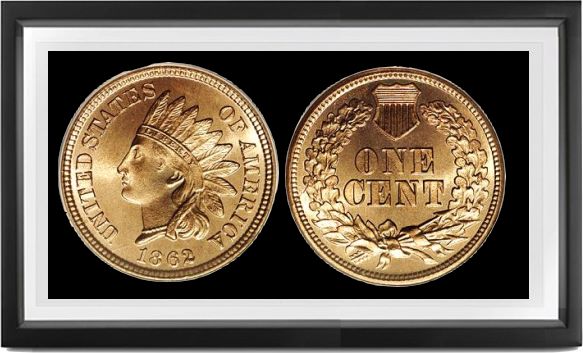 LATE IN 1859, probably to remedy imperfect striking quality of the existing "Indian" head device, Mint Director Snowden hart Longacre submit alternative reverse designs, one of which was to be selected for adoption as of Jan. 1, 1860, Snowden decided on a design not earlier found, showing ONE CENT within an oak wreath with a plain shield above, as an alternative to an earlier version (1858) with rococo ornamental shield. Many hundreds of 1859-dated samples were struck, some of them finding their way into circulation, but the design was regularly adopted only at the beginning of 1860.

During this year it developed that more cents had been paid out by the Mint in exchange for worn Spanish and Mexican fractional silver coins than could be absorbed in circulation. Merchants were plagued by customers buying 50cent or $1 items and offering bags of cents in payment. These bags were obviously far more inconvenient to handle even than silver dollars. However, in many areas they faced the choice of accepting cents by the bag or nothing at all, as silver coins of all types were beginning to disappear from circulation. It was no help whatever that the cents were not legal tender and could therefore be legally refused; merchants often had literally nothing else to offer in change for gold dollars, customers seldom if ever had anything else besides cents and gold dollars.

Congress, believing that the withdrawal of foreign silver coins from circulation might have been partly responsible for this weird state of affairs, repealed the clause which had authorized Snowden to redeem foreign silver in cents, but the Mint Director went on doing it anyway for another year—or practically until he was replaced in office by nickel's then foremost opponent, James Pollock.

However, by the end of 1862, even the copper-nickel cents had disappeared from circulation. What you were likely to find in your pocket or pay envelope by then was a variety of irredeemable paper "shin platers" and a quantity of cent-sized copper tokens issued by a variety of merchants, most of them equally irredeemable, and some of them (many more by 1863) no longer even giving the merchant's name or address. No law existed then against the issue or circulation of these things.

In the meantime, Joseph Wharton (the nickel entrepreneur on whose behalf nickel had been chosen by the mint authorities as a coinage metal since 1857) had gone to Canada to open new nickel mines, but at first even these failed to provide enough of a supply of metal to make the cent alloy, and the price went up so high that cents cost more than their face value to produce: 1795 and 1857 again, only worse. Even more excruciating, from the government's side, nickel ore had to be paid for in full, in advance, in gold—not silver and certainly not Treasury notes (interest-bearing or otherwise); nothing but gold would do, and tile Treasury had very little of that. The result was a variety of experiments: thinner nickel cents, and cents in other alloys (including aluminum-bronze, aluminum metal, a brassy concoction called "oride" from its alleged resemblance to gold, pure copper in several different weights), Finally, Mint Director Pollock, inspired by seeing many hundreds of varieties of the cent-size tokens which circulated where copper-nickel cents could not be had, decided "when you can't lick'ern, join 'em," and recommended that Congress authorize issue of cents in French bronze (95% copper, 5% of a mixture of tin and zinc whose proportions were to be determined by the Director), to weigh 48 grains apiece (=3.11 grams), or close to the average for the privately issued tokens. Cents would henceforth be legal tender, and private tokens illegal to issue.

Owing to hoarding activities during the war, Uncirculated nickel cents 1860-64 are to be found. No significant varieties are encountered.