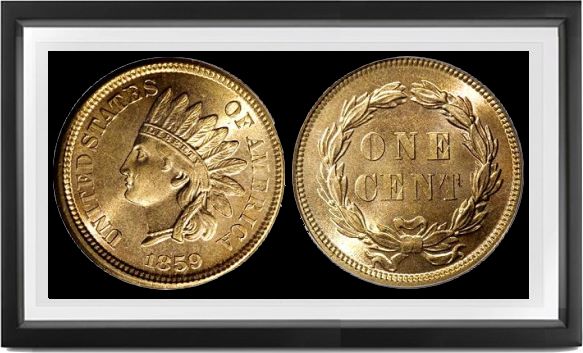 LARGELY OWING TO THE characteristic weaknesses of striking of the Flying Eagle cents (at eagle's head, tail and wingtips, the areas of wreath directly opposite these, and sometimes elsewhere), Mint Director James Ross Snowden instructed Engraver J. B. Longacre to make other designs, one of which would be selected to replace the Flying Eagle as of January 1, 1859. The result was some 60 to 70 sets of pattern cents.

The reverses were the adopted corn-cotton-tobacco wreath, an oak wreath without shield, an oak wreath with rococo ornamental shield, and a "laurel" [olive?] wreath. A few other sets were made up with the flying eagle die having larger letters. These sets were sold to collectors, and a very few original sets remain intact, though most were long since broken up—many evidently on behalf of collectors wanting a brilliant Proof Flying Eagle cent of regular issue for a date set. Several hundred extras were made on other various occasions, using three obverse dies differing in position of date, of the design Snowden favored most (No. 208 in the Dr. Judd book, U.S. Pattern, Experimental and Trial Pieces), namely the "Indian" head with the laurel wreath. Many of these were sent to Treasury officials and other VIPs. Snowden obtained official consent to the change, and as of January 1, 1859 this design was adopted—largely because it appeared to strike up best of the group, having the lowest relief.

The story was long told about Longacre's model for the "Indian" cent. Obviously no American Indian profile, this is evidently a Caucasian female, and legend had it that she was the Engraver's little daughter Sarah (later Mrs. Sarah Longacre Keen)—supposedly sketched while playing with a toy war bonnet. Mrs. Keen herself came to believe the story. Unfortunately for legend and illusion and childhood memories, the identical profile is found—with a large variety of different headdresses—in Longacre's sketchbooks as far back as 1849, and Longacre himself referred to the profile as that of "the Venus Accroupie" (Crouching Venus), apparently one of the Greco-Roman statues then housed in a Philadelphia museum. The profile is obviously not that of any child, but of a mature woman, with a remarkably long nose, and the typical "Greek profile" (straight line from forelock to tip of nose). It first appeared on the Type I gold dollar of 1849, then on the double eagle, then on the three-dollar piece and the Types II and III gold dollars (1854, 1856) before being modified in headdress for the cent.

The 1859 cents are remarkably uniform except for one very rare corrected blunder (date first cut too low, very close to border, then re-punched in a normal position, about half way between border and truncation of neck). They are usually softly struck, not so sharply brought up on details of feathers or low curls as are later cents.

Late in the year, for reasons nowhere recorded but believed to have to do with the abovementioned weaknesses of striking quality, Mint Director Snowden decided on a change of reverse die, and selected one not previously used, showing an oak wreath with a plain shield above. With the adoption of this new reverse design, the laurel wreath vanished from American coin designs as a major device, not to return except on the nickel 3 cent piece (1865-89).