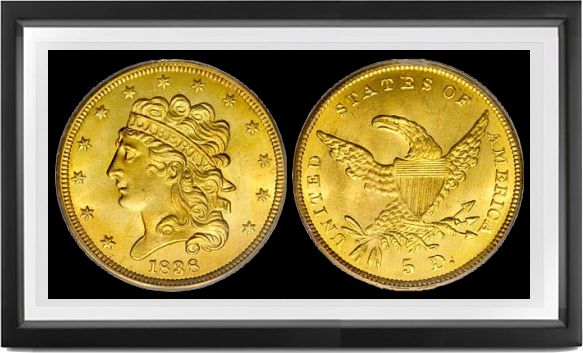 EVER SINCE REGULAR COINAGE began in 1793, the Mint's principal output consisted of one denomination for each metal: copper cents, silver half dollars, gold half eagles. More dies were required for any one of these denominations than for all the other six put together. The problem created by increasing coinage output in the 1820's and 30's was always to multiply working dies identical in principal devices—such stereotypy being thought a principal deterrent to counterfeiting. (It did not prove to be so.)

The problem became acute after Congress passed the Mint Act of June 28, 1834, reducing the weight of all gold coins. As soon as it became apparent that this bill had a good chance of passage, 24,568 half eagles struck on May 30 were prevented from leaving the Mint, and were re-turned to the Melter and Refiner. Anticipating floods of "old tenor" (heavier weight, 1795-1834) gold for recoinage, Mint Director Samuel Moore ordered Engraver William Kneass to prepare a large quantity of new dies, omitting the Great Seal's motto E PLURIBUS UNUM, which Moore had been trying to phase out ever since 1831. Partly to save time, partly through personal preference, Kneass always chose to adapt older designs, and this time the honor went to the old and formerly controversial John Reich "Classic Head" type, seen on cents 1808-14, half cents 1809-11 and 1825-36. The eagle was a modification of the one Reich put on gold coins beginning in 1807. Kneass had his work cut out for him, as quantities of gold coins bad to be on hand to pay the first long lines of depositors as of August 1, 1834—the date conscientiously placed by Bechtler on his own new tenor gold fives.

The anticipated flood of old gold coins materialized, and it has been estimated that over 99% of the original mintage was melted between 1834 and the early 1840's, much of it being turned into "Classic Head" half eagles. Supplies were augmented by a variety of other sources, the most tragic being bullion from parts of Georgia until then owned by the Cherokee Indian nation, by perpetual treaty with the US. government. As usual, the Indians had honored the treaty, but the white men did not, and accordingly the Cherokees were dispossessed of their land and driven across the Mississippi River. Hazards of shipping gold to Philadelphia—largely poor roads, shipwrecks, bandits and understandably hostile Indiansinduced the government to build branch mints at Charlotte, N.C., and Dahlonega, Ga., for coining locally produced gold. Beginning in 1836, still more gold came in as French coins, part of an indemnity paid by the "Citizen King" for some now-forgotten incident, representing a triumph for President Andrew Jackson.

Coinages of the new type far exceeded even the Mint's wildest expectations. Nevertheless, Mint State examples of this design are very rare, especially of 1835-38, as the coins went into circulation to stay, few being saved for souvenirs.

Despite the official policy requiring uniformity of design on all denominations of the same metal, the 1834-38 period was notable for a profusion of brief minor modifications of the Reich head—which evidently never did satisfy the Mint people, as it was abandoned for good in 1839. Two different versions are found in 1834: large wide rounded end to bust with large 4, and short narrow end to bust with small 4 (or, in one rare die, crosslet 4). This final 1834 head is found on the majority of 1835 coins, but a scarce small minority (with taller 1 in date) have a still different head. Those of 1836 have a very similar head with double forelock (earlier types have single) and other minor differences in hair; both the late 1835 and the 1836 heads reappear in 1837, which year is also notable for coins with large and small dates, the latter very rare. Very minor modifications are found on the coins of 1838, which date also marked the first appearance of half eagles from the branch mints. These have C or D mintmark above date, and are in extreme demand among type collectors.

The coins of this design are mementos of a period of rapid change and experiment in the Mint, immediately succeeded by decades of stereotypy after the new Gobrecht Coronet design was adopted.