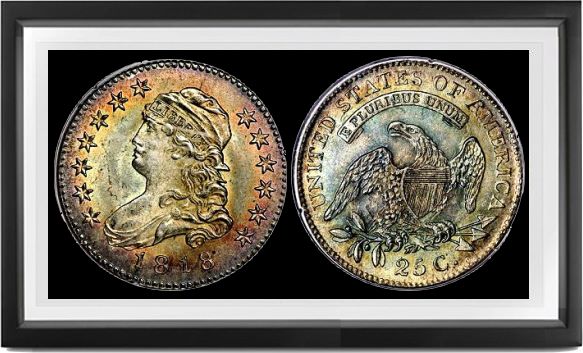 JOHN REICH INTRODUCED his new effigy of Ms. Liberty, buxom to an uncommon degree and wearing a mob-cap inscribed with her name (commonly though inaccurately thought to represent a pileus or Liberty cap), in 1807 and at first on the half dollars. Contemporaneous newspaper scurrility had it that the device was a portrait of "the artist's fat mistress." Nevertheless the design continued, extending to the dimes in 1809 and to the quarter dollars on the next occasion when local banks ordered them " 1815. The mintage figure of 89,235 for this date includes 20,003 delivered January 10, 1816 from the 1815 dies; the small mintage probably results from bullion scarcity during the War of 1812. The next day, a fire broke out in the Mint, ruining apparatus for rolling gold and silver ingots into strips, so that no more precious metal could be coined until late 1817.

Many specimens dated 1815, and a far smaller number dated 1825, show a small counterstamp of E (more rarely L, very rarely R) above head, apparently of official origin. These were formerly thought to refer to weight, but specimens of both dates with E and L have been recently weighed and found within normal limits. The explanation remains unknown, probably buried in the Archives.

One of the 1818 dies, found with three different reverses, shows final 8 punched over a 5 " 1818/15. Both 1819's with small 9 have colon after 25 C: rather than period; the one with uneven date spaced 1 819 is very rare, as the obverse die broke down immediately after being put into use. In 1820 there is one great rarity: this is the small 0 obverse with olive leaf left of lower berry joining border. None of the 1821 varieties is very rare.

The 1822 with blundered reverse, 25 punched over 50, is very rare not because of die failure, but because the die was laid aside in horror as soon as impressions were examined; it was used again, not for very long, only in 1828. The coinage reported for 1823 appears to have consisted mostly of coins dated 1822 and possibly earlier dates; the 1823 die broke down at once, and less than a dozen specimens are reported in all grades, including a single Proof. In 1825 there is one major rarity unrecognized in most references; this is the 1825/22, with date very widely spaced, most specimens being well worn.

The rarity of the date 1827 is unexplained. At present 11 or 12 examples are known from the original dies, almost all of them Proofs; the reported mintage of 4,000 is likely to have consisted mostly of coins dated 1825, Joseph J. Mickley, one of America's earliest collectors (1799-1878), obtained four Proofs from the Philadelphia Mint in the year of issue as change for a Spanish dollar; for decades these were the only ones known. In 1858-59 about a dozen restrikes were made using the original obverse die and an old cracked and rusted reverse of 1819; these have a flat based 2. There were also five or six restrikes in copper. The date 1828 is marked by use of the old blundered reverse of 1822 earlier mentioned; this date represents the final appearance of the motto on this denomination. Beginning later in the year, the Mint introduced a close collar for use on silver coins, with an aim of reeding edges at the moment of striking, and imparting a mathematical equality to the coins' diameters; but this improvement was not to be extended to the quarters until 1831.