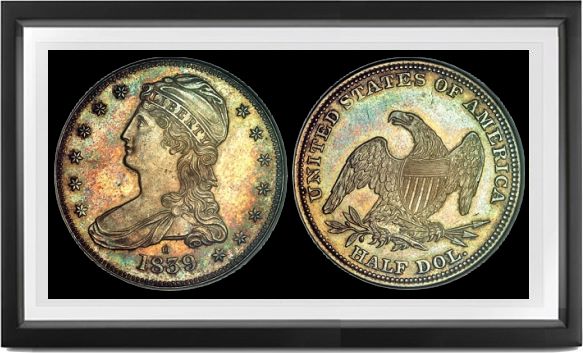 THE MINT ACT OF JANUARY 18, 1837 authorized half dollars to be coined henceforward at the weight of 206 Â¼ grains, 900 fine, proportionately to other silver coins. Before 1/18/37 half dollars had been issued, dated 1836, at the newly proposed weight, including approximately a dozen brilliant Proofs and 1,200 business strikes, beginning on November 8. They are therefore technically patterns, but as the design was adopted they have long since been assimilated to the regular series, especially as they were shipped to local banks. They were the first coins made for circulation by the Mint's new steam press; only a single pair of dies was used for Proofs and business strikes, and specimens survive in all grades. The design is Christian Gobrecht's modification of the old Reich devices, but with 50 CENTS in small letters instead of the old 50 C. Edges are for the first time reeded, the reeding being imparted by a "close collar" at the moment of striking. The 1836 of this type has been recognized as rare for over 110 years; the 1837 was coined in some quantity-3,629,820 in all.

There are no major varieties of the 1837 dies, though there are several minutely different obverses showing varying spacing's of the date and different die cracks. There are, however, at least four edge collars used for halves of this date, one of them identical to that used for the 1836 coins. The rarest is the "broad mill," 31.5+ millimeters, with wide rim outside border beads. The "medium mill," 30.5 mm, comes with heavy or fine reeding, the latter as on the 1836. There is also a "narrow mill" type, a scant 30 mm. The coarse or heavy reeding type found on "medium mill" coins is nearest to that used in 1838, though not identical.

Proofs of 1837 are rarer than those of 1836, only three being seen within the last twenty years, only one of these with an auction history (ex Col. E.H.R. Green, son of Wall Street's famous Hefty Green), later in the Adolph Friedman collection and the 1949 ANA Convention auction.

Taxay lists a variety with so-called "inverted G" in AMERICA, evidently an engraver's slip making the C resemble a mirror-imaged G. This is very rare, the slip usually weak—apparently the die was reground to efface the peculiar mark.

Coins occasionally reported of date 1837 with the old lettered edge and 50 C. are without exception counterfeits, thought to be of Mexican origin.

The 50 CENTS design has become increasingly popular in recent years, considering that effectively the type was in use for only 14 months.