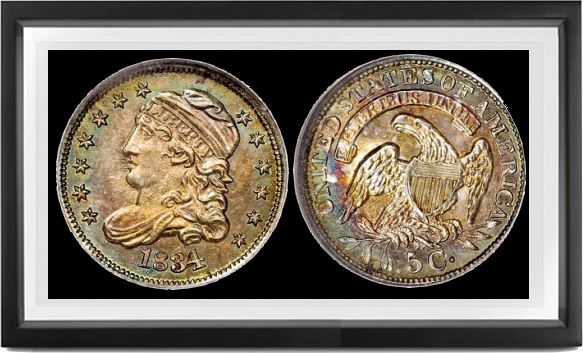 AFTER A HIATUS of over 24 years, coinage of half dimes resumed July 4, 1829, from new dies designed and rubbed by William Kneass, after the old John Reich half dollar design of 1807. Like the dimes of 1828, these half dimes have a plain raised rim encircling a border of round beads; diameters are uniform because they were struck in a "close collar" which imparted the reeded edge.

Two major varieties for 1829, the first with triple lines in gules (red stripes) of shield, the second with double stripes. The former includes no really rare varieties, but together they comprise only a small part of the total population of 1829's in all grades. Over 20 Proofs of this date are known, most of them from triple-stripe reverses, evidently made to celebrate the new coinage. For 1830 there is one major variety aside from the normal issue. This has C in AMERICA over a horizontal C (first cut rotated 90° from normal, then corrected); it is very rare, possibly Rarity 7 (4 to 12 pieces known). No major varieties for 1831, Coins of all three years so far considered comne with cracked-die reverses suggesting that old dies were all carried over to the new mint in 1833 and indiscriminately muled as long as they would stand up, to save time of making new dies.

1832 is without intentional major varieties, but one reverse die (V-3 and "B-10"—obv. V-8, rev. V-3) is so worn down as to show no berries at all in branch; this is extremely rare. On at least four other varieties (V-1, 5B, 6, 7) the berries are small and weak but visible with a glass. (V-numbers indicate Valentine varieties, from D. W. Valentine, The U.S. Half Dimes, American Numismatic Society, 1931.)

No major varieties of 1833 or 1834, and much of the mintage reported for both years are believed to have included coins of earlier dates. In 1835 we find large and small dates with large and small 5 C. in all four possible combinations.

Common varieties exist of all four types, so that historically there has been no difference in price levels. With large date and large SC, there are five varieties (V-2, 3, 4, 8; B-11); with large date, small 5 C., V-9 and 10; small date large SC., V-5, 6; small date and 5 C,, V-1 and 7. It appears that the large date and large 5 C. combination forms a somewhat larger percent of the total population than any of the others, though probably not a majority.

Coinage of this design was stopped in anticipation of the change to the Liberty Seated design, which change took place on July 25. With a few exceptions collectors were formerly content to obtain only one of a date for the Capped Bust half dimes; the reason was largely that the major varieties were not publicized, and the solitary reference book (Valentine, 1931) omitted any indication of rarity levels for the varieties. My own pamphlet supplement to Valentine—now out of print and unavailable—was only a beginning, and I hear that other research is now in process on the series as a whole, though a book is probably years away.