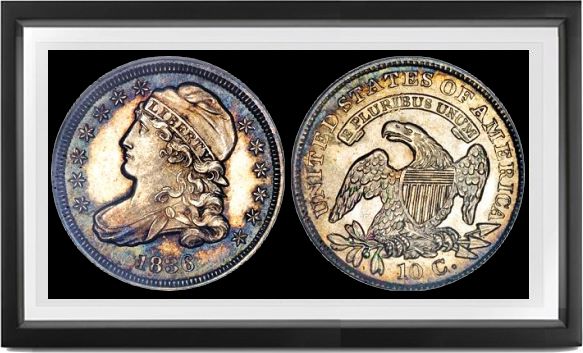 UNLIKE EARLIER DIMES, the coins of this issue were struck in what the mint people called a "close collar." This was a heavy steel slug into which a hole had been bored the exact diameter of the finished coin, and grooved to impart the reeded edge. This collar fit just above the reverse die, confining each blank as it was stamped. After striking, the same motion of the flywheel caused upper die to retract, lower die to rise through the collar, pushing out the newly minted coin, while metal fingers began to brush it out towards a receiving basket. Then the lower die sank below the collar, the upper die began to descend, and another blank was fed from the hopper into the collar. This process enormously speeded up coinage, saving the time of separately reeding edges of blanks before striking, and imparting "a mathematical equality to the diameters" (to quote Mint Director Samuel Moore). Earlier issues had been struck in an open collar, which positioned the blanks on the reverse die but did not confine them, as this would have flattened the edge letters or reeds on the blanks.

However, even this increase in mechanization did not yet render identical all a year's output, though this was the ideal towards which mint practice strove. Dies still required hand-punching of dates, stars and letters. As a result, for 1829 alone there are four different sizes of 10 C,: (1) very large, with the smallest border beads—reverse of 1828, and very rare; (2) large, with coarse border beads, rare; (3) small, with round 0 in 10 C., many varieties; and (4) medium, with narrow oval 0 in 10 C., a die of 1831, scarce. There is also a great rarity with small 10 C. altered at the mint from larger 10 C., traces of the larger elements plain above the small 10 C.; not over four of these are reported to date.

In 1830, besides the small and medium 10 C., there are two other rarities. One of these results from drastic die regrinding, and lacks period after medium 10 C; the other is the famous overdate, of which fewer than eight are known to exist, and whose rarity is explained by drastic regrinding of the obverse die, which effaced the traces of 29 around 30 after only a small number had been struck.

In 1832 and 1833 varieties occur with final digit much too high; these are not too difficult to find. In 1834 two different sizes of 4 are found, the large 4 usually with its crossbar broken away; coins with perfect crossbar to large 4 are rare. The small 4 has the diagonal at a much narrower angle to the vertical, and its crossbar extends far to the right of the upright.

Most of these dates can be found in worn condition, but very scarce to rare in Mint State; no one date can be singled out as a rarity (aside from the overdate and other varieties cited above), though the 1837, with its limited mintage of 359,500, could be undervalued compared to the other dates. Coinage of this design in this year was ended quickly to permit the introduction of the new Gobrecht design.