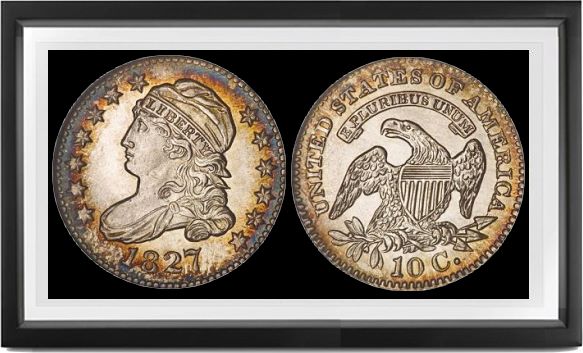 THE NEW REICH DESIGN, whatever its aesthetic demerits, represented a distinct mechanical advance over both previous types of designs. Heretofore, only the draped bust and eagle had been imparted to working dies by hubbing. On the previous Heraldic design (1798-1807), to the basic central elements had to be added by hand some 63 elements: date, inscriptions, stars on both sides, berries. In addition, arrows and some other details had to be strengthened by hand. With the new design—adapted by Reich from the devices he had first used on the half dollars of 1807—the number of elements which must be entered by hand dropped to 42, with far fewer details needing to be strengthened in each working die. This meant that each die took less time to complete (note that every numeral or letter that must be hand entered had to be hammered and rehammered into the die blank until it made a deep enough indention), with less stress hardening and consequent brittleness, and a consequent improvement in die life. The ultimate object was to allow for a great expansion in quantities of coinage.

This expansion did not materialize until 1827 and not much even then. Local banks seldom ordered dimes to be made from their bullion, as worn Spanish or Mexican one-real pieces were preferred in trade. The small quantities that did reach circulation stayed there; strictly Uncirculated dimes of this design dated before 1827 are very rare.

Mintage figures given for 1809 should be increased by 6,355 to include that quantity struck in 1810 from 1809 dies. All 1811 coins have the date 1811 over 1809, from an unused 1809 die, testifying to unexpectedly low bank demand for the denomination; on later impressions from shattered dies, the figures 09 with 11 are very hard to see. Despite contrary Guidebook listings, the Small Date variety of 1814 is much rarer than the Large Date of the year, considerably rarer even than 1811, and very difficult to locate in Mint State. This year, 1814, is also marked by one other rarity, showing STATESOFAMERICA as one word. The same die was reused in 1820; put aside as an obvious blunder, the die was later included in one of the lots of scrap metal sold by the Mint, recovered by private parties, and eventually bought by Robert Bashlow (the promoter of the restrikes of the Confederate cent, 1961), who had some 536 impressions struck from it in Scotland, in platinum, gold, silver, nickel, copper and other metals. Some of these were uniface, others had a fantasy reverse reading GOD PRESERVE PHILADELPHIA AND THE LORDS PROPRIETORS. The die and all impressions were seized by Treasury officials and destroyed as counterfeits despite strong efforts to have the die presented to the Smithsonian Institution.

In 1828 borders of round beads were introduced for the first time since 1793, as William Kneass began his program of sharpening up all coin designs. Some 15,000 large date coins (plus a small quantity in 1829) were made, together with 20,000 small dates; both are rare in Mint State, especially the former.