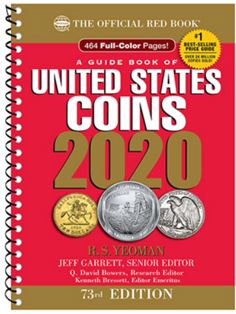 The newest edition of the coin hobby’s annual Guide Book of United States Coins (popularly known as the “Red Book”) debuted on April 9. The 73rd edition (with a cover date of 2020) features extensively updated pricing and auction data reflecting the current market for collectible coins, which has seen dramatic ups and downs in the past year.

According to senior editor Jeff Garrett, “The 2020 edition reflects many changes in pricing and discoveries in numismatic scholarship made over the past year.”

Editor Emeritus Kenneth Bressett remarked on the changing market: “Coin collecting has seen some major adjustments in prices and participation over the past couple of years. For those who are relatively new to the hobby, this may seem unsettling and worrisome. Others, who have been involved for a decade or more, have witnessed similar trends and changes over the years and understand that such things are market adjustments that respond to collecting trends and interests.

“Values shown in the 2020 Red Book reflect these changes. Some are up and others are down. The most evident trend is that common, low-grade coins have lost some of their value because of the declining demand or participation by neophytes. Conversely, many rare coins, especially those in high grade, are regularly in demand and have seen dramatic price increases. Ultimately, interest in coin collecting will continue along its rocky path as it has for hundreds of years. I look forward to the future utilizing all of the many innovative features of mass media and electronic communications that will make the hobby even more enjoyable to a new generation of collectors.”

The 73rd-edition Red Book is 464 pages and prices nearly 8,000 entries in up to nine grades each, with more than 32,000 retail valuations in total. Its panel of retail-pricing contributors includes more than 100 active coin dealers and market analysts with decades of experience.

Research Editor Q. David Bowers commented, “The annual Red Book stands as the one volume I keep at my side when buying, selling, or writing about coins. Year by year, it has improved since I bought my first copy as a young teenager in 1952. The 2020 edition is the best ever.”

These are illustrated by 2,000 photographs, including enlarged close-ups of rare and valuable die varieties.

The 73rd edition covers 125 more individual coin issues than the 72nd edition, as well as 14 new coin sets. Mintages have been updated across the board using the latest numismatic research and government-supplied data.

Collectors will also find complete coverage of the full range of American Eagle and other bullion coins and sets (in silver, gold, platinum, and palladium), with mintages and values for each.

“Last year, we condensed the bullion sections to make room for new content,” said Whitman publisher Dennis Tucker. “This year we’re bringing back the full bullion catalog because we know how important these popular coins are to collectors.”

Edits based on recent research can be seen in the pre-federal sections. The text for collectibles, such as the Pitt tokens, Rhode Island Ship medals, Fugio coppers, Georgivs Triumpho tokens, and 1792 “quarter dollar” patterns, has been updated.

As in past years, collectors benefit from the Red Book’s recent auction records provided for significant rare coins. Typeset throughout the charts are nearly 200 notable auction results. Combined with the listed retail prices, the auction data help advanced collectors understand the modern market for high-priced rarities.

In addition, the appendix of the “Top 250 U.S. Coin Prices Realized at Auction” has been fully updated.

“This is the first year the Top 250 includes more than 100 auction sales higher than $1 million each,” observed P. Scott Rubin, the compiler of the records. “This is also the first year coins had to sell for more than $600,000 just to make the list.”

The cover of the spiral-bound 73rd edition shows a mix of old and modern American coins: an 1850 Baldwin & Co. $10 Horseman gold piece; the 2019 Apollo 11 commemorative silver dollar; and a World War II-era Liberty Walking half dollar.

This article was originally printed in Numismatic News